Earlier today the High Bridge reopened after a way-too-long closure—45 years, to be exact. The bridge, NYC's oldest standing bridge, serves pedestrians and cyclists (no motorists), and connects the Bronx to Manhattan. 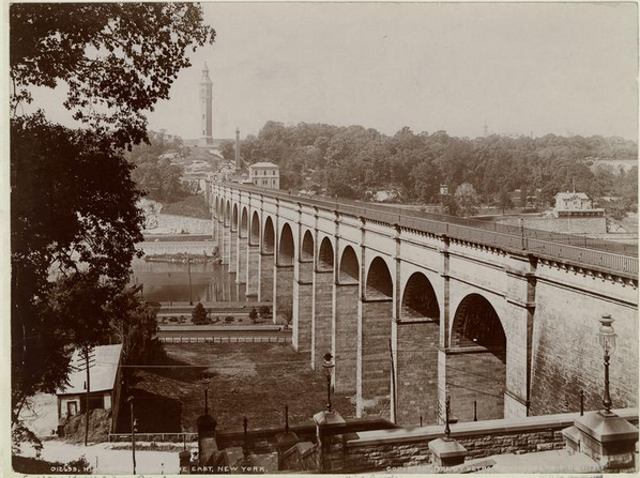 The landmarked bridge was originally part of the Old Croton Aqueduct, which brought NYC its clean water. Today, it will not only serve to connect the boroughs, but the surrounding area now includes more than 125 acres of green space with baseball fields and basketball courts (which opened a few years ago). While you'll also notice some new, finer details, like the manhole-sized plaques embedded in the walkway, do a little exploring for some history. There's an old stone building at the Manhattan entrance, and on the Bronx side there's a wall that we were told was built by the crew that originally built the bridge.

The project has been in view for about a decade, and cost around $61.8 million—funds were provided by the City of New York through PlaNYC, the Honorable José E. Serrano, and the Federal Highway Administration. Today's grand reopening turnout included reps from the city, as well as Sonia Manzano (Maria from Sesame Street), who just wrote a children's book about the bridge.

Click through for a look at the bridge from earlier today—and head over there yourself. It will be open daily from 7 a.m. to 8 p.m.

#high bridge
#parks dept
#the bronx
#the high bridge
#original
Do you know the scoop? Comment below or Send us a Tip
A new Gothamist is coming! We’ve moved comments over to our beta site. Click here to join the conversation and get a preview of our new website.