Photos: Hunting For The Greenest Block In Brooklyn Throughout July, the Brooklyn Botanic Garden dispatched a team of discerning judges to hunt down Brooklyn's greenest block. 186 residential and commercial blocks from 26 neighborhoods entered this year's battle, and the best contenders were whittled down to a semi-finalist round, with representation from 12 neighborhoods, including Bay Ridge, Bedford-Stuyvesant, East Flatbush, and Windsor Terrace. The winners (last year's greenest block was in Prospect-Lefferts Gardens) will be announced in August, but here's a behind-the-scenes look at the contest from one of the judges, freelance writer and author Jen Doll.

I live in Brooklyn. I like the color green. Plants, yep, they’re totally cool—I have even a few, and they are alive! But when I was asked to help judge the 19th annual Greenest Block in Brooklyn contest held by GreenBridge, a program at Brooklyn Botanic Garden that promotes urban greening, I was not quite sure that I was up to the task. I said yes, because who wouldn’t want to judge the Greenest Block in Brooklyn? Then I spent an entire afternoon reading about the history of the contest and familiarizing myself with the judging rules, which were not exactly simple: For example, “Are native plants being used? What is the quality and condition of the plants? How do the tree beds look? Are tree guards well designed? Are flowers deadheaded? What efforts indicate community effort?” And those were just a few of the questions. 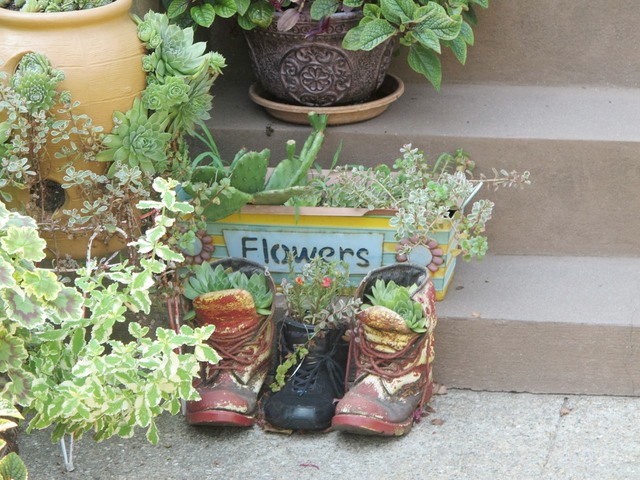 The next morning, after chugging as much coffee as possible, I arrived at the Botanic Garden’s business entrance by 9 a.m. sharp, expecting to be whisked immediately through a blur of gorgeous yards and side lots on one of the hottest days of the summer thus far. Instead, another judge and I were ushered upstairs into a quiet, pleasantly air-conditioned administrative office. There we were given BBG baseball caps, Greenest Block in Brooklyn buttons to wear outside (so residents knew we weren’t lurking real estate agents after their property), and large metal clipboards marked with GreenBridge logos full of information about our responsibilities as judges as well as specifics of what we were looking for: sustainable, local agriculture, earth-friendly methods of taking care of one’s space, communities working together, green. There were handy photos of flowers and plant life for easier identification in our packet, along with checklists and forms to fill out with scores for each block.

At this stage in the competition, there are 40 semi-finalists. Each block is ranked numerically by a team of judges according to the criteria provided—though of course, there's inherently a bit of subjectivity involved—with winners (and honorable mentions) to be announced in a press conference held on August 7th. Our group would see and judge 10 blocks. I breathed a sigh of relief when they said we’d be driving in an air-conditioned vehicle to see the neighborhoods on our list, which were in Lefferts Gardens, Park Slope, Windsor Terrace, Beverley Square West (which you may know as Ditmas Park), East Flatbush, and Bedford Stuyvesant. I’d naively worried we’d be hopping on and off the subway or possibly walking, but no, these folks are pros.

We piled into a van loaded with supplies including icy lemon water, peanut butter pretzels, cookies, and ginger tea for sustenance, and we set out to find Brooklyn’s Greenest Block from the neighborhoods we’d been assigned to judge. That’s the important thing about this contest. You might assume, rolling your eyes, that it’s a just another element of the ongoing artisanal mayonnaise-ization of the borough, but it’s actually a grassroots (literally, grass and roots) effort from each neighborhood, and diverse ethnic and socioeconomic makeups of each block were evident. 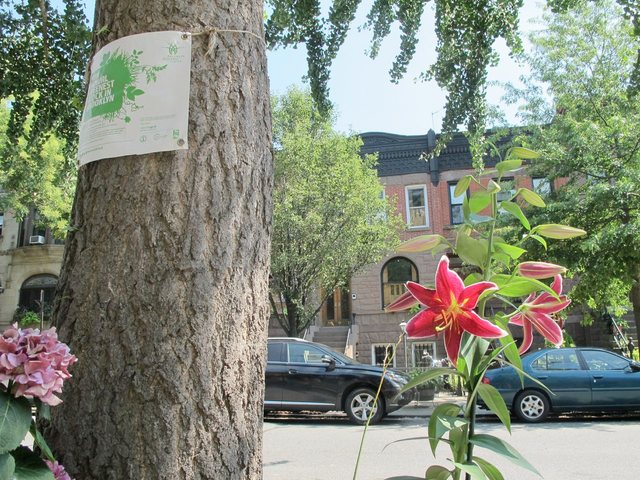 This contest, which block associations must enter, is not about awarding rich people for having nice plants. It’s about celebrating the neighborhoods that are working together to make their urban habitats a little bit greener, in whatever way they can. Some are young, working families, some are yuppies, some are retirees. “It’s kind of a great equalizer,” said Nina Browne, program manager for GreenBridge, explaining that one Park Slope block gets together for a “wine and mulch night” while other groups initially bonded through their childen’s garden. From gardening comes holiday parties, neighborhood watch programs, and more: “It’s a gateway into building community,” she said.

Browne was our driver for the day and the on-hand expert to explain which tree guards were right and which were wrong, which plants were “native”—much like the move toward local food, she pointed to a trend in more locally originating plant life in green spaces—and how the greening of Brooklyn has changed over the years. "South Brooklyn was hard hit after Sandy," she told us on the way to our first neighborhood, and so this year there were no entrants from spots close to the shore. Some blocks, she explained, have been participating for years; with others, this was their first or second year out of the gate. “This is an endurance game,” she said. “The blocks that win pace themselves.” 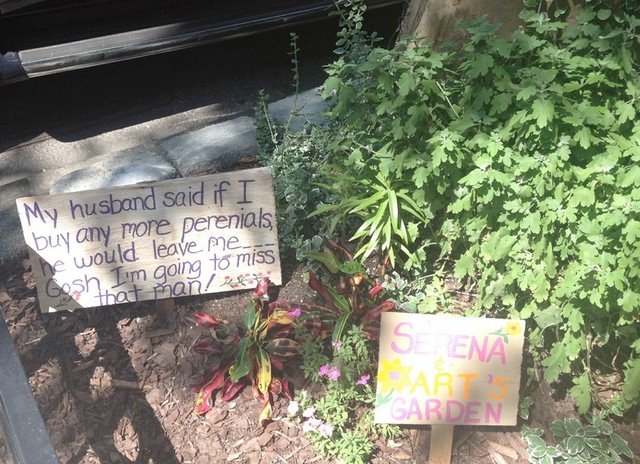 As with many neighborhoods in New York City, the first we saw, in Lefferts Gardens, was fighting the good fight against one of the more villainous of city ills: dog poop on the sidewalk. Signs warned neighbors and passersby not to allow that foul thing. Throughout the block there were planters hanging and planters stationed where there were no tree beds. In private yards there were succulents, a huge cactus, and Echinacea, which is a native plant and looks (to my untrained eye) like a pretty purple-pink flower. Ladies sat outside one of the houses and waved when we walked by. Kate Blumm, Communications Manager for BBG and one of the other judges, told them, “Your block is looking beautiful,” and they beamed. Winning is a big deal for these blocks; not just for the bragging rights, but also because the winner gets a $300 prize, along with gardening tools, and a sign commending them for their award.

In the elegantly maintained Park Slope neighborhood we visited, there was a gardener outside one large building, watering plants, but in most spots the plants were tended by avid amateurs bent on beautifying the space around their homes. On one block, nearly every house not only had beautiful plant-life outside, but also white picket fences and American flags—it felt a bit like visiting Cape Cod on the Fourth of July. And I was reminded, as city dwellers, how localized we become. We stick to our patterns of home to work, and work to "out," perhaps, and then home again, but rarely once we’ve lived in the city for a while do we venture to uncharted territory.

Yet it’s a big, big world out there in Brooklyn (and beyond), and for all the fears of, on one side, gentrification, and on the other, say, Jeffrey Steingarten’s recent criticism that Brooklyn is only worth the trip so you can stare back at Manhattan, the truth is that the generalizations tell not even half of the story. There’s a lot more to Brooklyn than “disfavored neighborhood” or “hipster haven,” and yet, when we don’t venture past our regular haunts, we tend to forget, or to stick with the cliches. 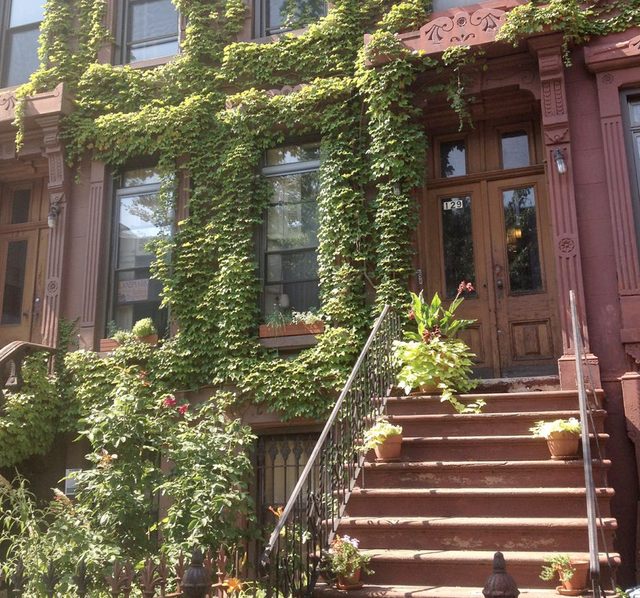 With half of our visits made, we stopped for lunch and to charge our phones—we’d all become picture-taking machines, snapping everything from pretty window boxes to under-mulched plant life to what I started calling “garden swag,” like teddy bears, fat Buddhas, the use of old shoes as planters, and other yard accoutrement. One neighborhood had painted its fire hydrants to match its planters, a charming effect. In another, the trees themselves were the stars, branching overhead to form that gorgeous shady tunnel that’s a boon, especially, in the summer months.

A man was outside his house enjoying the cool and when we told him his block was a Greenest Block semifinalist, he smiled big and said, “I’m going to go inside to shout,” and then, “I feel good!” Say what you will about the New Yorker stereotype, but there was so much earnest block pride, which of course is a big part of the contest: Another neighborhood sported matching banners with their street's name on several of the homes, and many had their block association signs—some vintage, from many years past—displayed prominently.

We did run into a certain number of New York characters. One woman walking her two dogs exclaimed, when we told her we were judging Brooklyn’s Greenest Block, “It’s Park Slope, for Chrissakes! What do you expect?” before telling us of a neighbor who complained about a mulberry tree “because it looked too messy.” In an East Flatbush neighborhood a man drove by in a car and pointed to an abandoned, boarded-up building on the block. “Who owns that?” he asked. “I wanna buy it!” Also on that block was a building that had been tied up in an estate dispute for many years, falling into such disrepair that it no longer had a roof; you could see, through the windows on the second floor, sky. In this case the block association could do nothing about the state of the building itself, but they’d adopted its yard and continued to tend it. 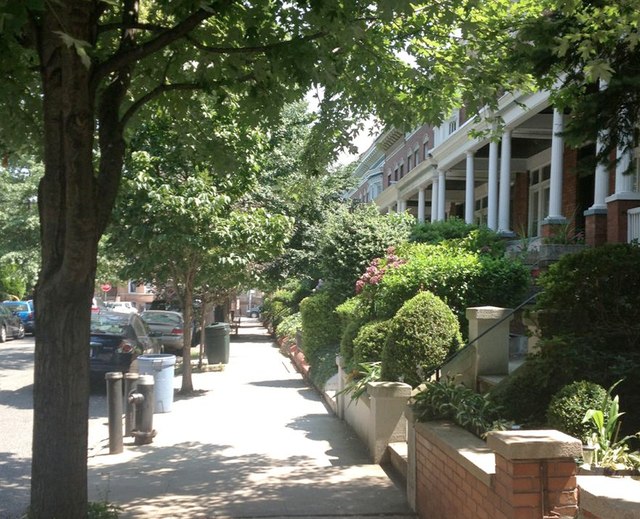 By the end of the day, I was nodding along when Browne pointed out native plants, problematic tree guards, and under-watered soil (in fairness, in a heat wave, it’s hard to keep any soil moist). We stopped by a block that wasn't on our list to judge but we had to see anyway, because she said it had pretty much the best tree beds she'd ever witnessed. We got out and investigated. Getting the kids of the neighborhood involved, the block had painted leftover housing shingles in multicolors, with sentiments like, “All gardeners live in beautiful places because they make them so,” “Don’t litter,” “Water me,” and “My husband said if I buy any more perennials he would leave me — Gosh, I’m going to miss that man!”

As we admired the signs and tree beds a woman asked politely but briskly, “Can I help you?” “We’re judging Brooklyn’s Greenest Block,” I explained, and she broke into a huge smile. “Oh!” she said, and when Browne explained this block was a semi-finalist, particularly notable for, yes, the tree beds, the woman nearly did a dance of joy outside on her front stoop. “I’m going to go inside and email everyone right now!” she said. "They're going to be so thrilled!" Maybe it was the heat of the day, or that I’m a huge sap who cries at Disney movies, but I couldn’t help getting a little bit swept away by her enthusiasm.

As we wrapped up for the day and headed back to tabulate our selected winners, I couldn’t stop thinking about what Browne and Blumm had said. Plants didn’t judge. They gave everyone something to be a little more proud of, and blocks something to come together over. There was competition, sure—it was funny how often a beautiful lawn would have another beautiful lawn right next to it, or an excellent window box would seem to be in direct competition with the one right across the street—but if keeping up with the Joneses means Brooklyn gets a little bit greener, that seems a good thing.

The hardest part of the whole day wasn't the heat or the plant identification, it was choosing the best, because in my opinion, they all deserved to win. And now, as with many of those aspects of the city we tend to ignore for years, even though they've been in front of us the whole time, until they’re pointed out specifically, I can’t help judging all the window boxes and tree guards I see.