Photos: Hundreds Party In The Name Of Prince In Fort Greene Park

Hundreds of Prince fans rallied in Fort Greene Park Friday night despite gray skies and scattered rain for a party dedicated to the late pop icon. For three hours, classic Prince songs were blasted into the park, turning Fort Greene into Fort Purple and encouraging just about everyone to dance. Before the music stopped and an outdoor screening of Purple Rain began, we asked fans to describe what the legendary musician meant to them.

"Prince means family. I've got a very strong connection with my brother through Prince. He's much older than I am. When I was born he was in his adolescent years, but I grew up listening to Prince with him. With a big age gap we didn't have many things in common, but we always had Prince to share." — Nadine.

"When I see Prince, I see freedom of expression, freedom to be yourself. Freedom to be who you are, no matter who you are. Especially you can be a man, and rock some heels and not worry about your masculinity." — Sabrina.

"Prince means more than I can say." — Qaseem.

"He's balls to the wall unbridled energy, being just who you are." — Tene. 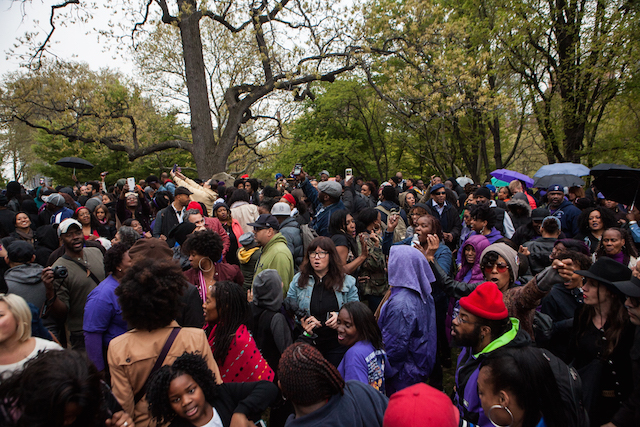 "Always feeling good and happy. I have a lot of memories with each of his songs. I'm from Minneapolis and I used to go to clubs and see him all the time, and my friend did his makeup on Under the Cherry Tree. I kind of met him once, I remember I was in high school, he walked past me with his bodyguards and I had a little heel on and he still only went up to my shoulder." — Kerry.

"What was it about Prince? He brought a community together. Just for the people. From '79 until the present, and I love seeing it now. At 67, I'm loving it." — Grace.

"When I hear his music, I feel like fucking. You put that Prince on and it just gives you freedom. You want to let loose and express yourself in the best way you can. Whether that means taking your clothes off or not, that's what it is. Prince is the epitome of freedom of expression. He gave everybody hope because he brought something original and new to us all." — Omar aka Big Ox. 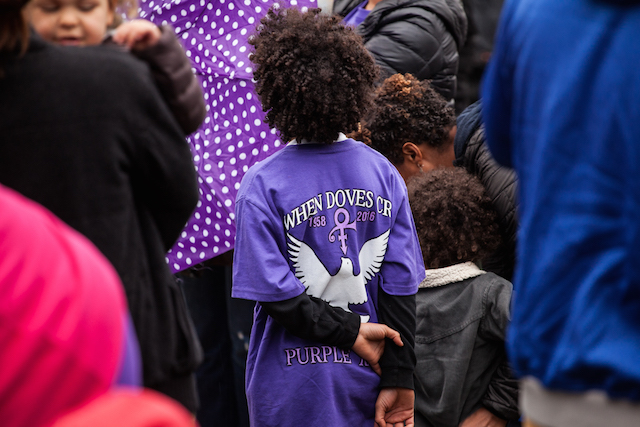 "Prince means everything to me. He's inspired people with his songs—everything comes from the heart." — Leroy.

"He's an icon. I never saw a man wear heels like him in my life. And his music is life." — Devon.

"Prince is love, peace, and happiness. I've seen Prince in concert, and he was phenomenal. I was hoping I'd get to see him again, but he died. My older brother then passed away, he loved Prince too, and he bought me my ticket to see him in concert. He sent me to Prince because he knew it'd make me happy." — Tara.

"I'm very happy from somebody from another planet came and shared his music with us." — Grecko.

"I've been crying since I got here. He's a big artist in Jamaica, and I'm Jamaican. It's like a part of me died." — Tamara.

"There is no word to describe Prince. Prince was beyond it all." — Chris.

"Prince blew my mind. Purple Rain was the first R-rated movie that I ever snuck into as a 13 year old. I saw this guy and I didn't know if he was black or white or gay or straight. Rock or funk or jazz, it fucking blew my mind then. I just went and saw Purple Rain last night and it blew my mind all over again." — Cam.

"When I hear Prince I feel uplifted. It's like the universe is speaking." — Benedicta.

"The night he died, I had sex to Prince songs, which is a little morbid but appropriate." — Amy.

"I want to dance. I've been having a nonstop dance party for the past week. I don't know how you can't be really impressed by everything that he's done. He was truly unique and very few people are completely their own thing." — Mary.

"It's a celebration. He always brought life wherever he went." — Maria.