Photos: How Forest Hills Stadium Got A New Lease On Life

Tucked away seven miles from the Manhattan skyline, Forest Hills Stadium is a concrete monument to a dead era that’s now come back to life. You can find a history of the 14,000-capacity stadium, which opened in 1923, right here—it was not only home to the U.S. Open for decades, it also hosted music legends the likes of Bob Dylan, Jimi Hendrix, and The Beatles. But once the 1980s arrived, it was left to decay. "It looked pretty terrible, nature had taken over," promoter Mike Luba recalls when he first laid eyes on it 2012. "There were trees growing out of compost piles in the bowl. There was stuff that had piled up for decades. But you could tell it was a gem just waiting to be polished."

This summer Forest Hills Stadium is boasting new improvements and a busy music schedule. We recently got a tour of the grounds, and this is the story of how it came back from the brink.

When Luba and his business partner Jon McMillan took over, they had been scouting New York City concert venues for Phoenix. Forest Hills soon caught their eye, and after cold-calling the West Side Tennis Club (which owns the Stadium) the two took on the colossal task of rehabilitation. They excavated trash and busted open doors locked since the Carter administration. They found old rackets, a surfboard, furniture, and plenty of unopened beer cans. One room still housed the hand-painted signs used to list matchups at tennis tournaments. Luba and his crew kept on working, but stowed those signs away for later. 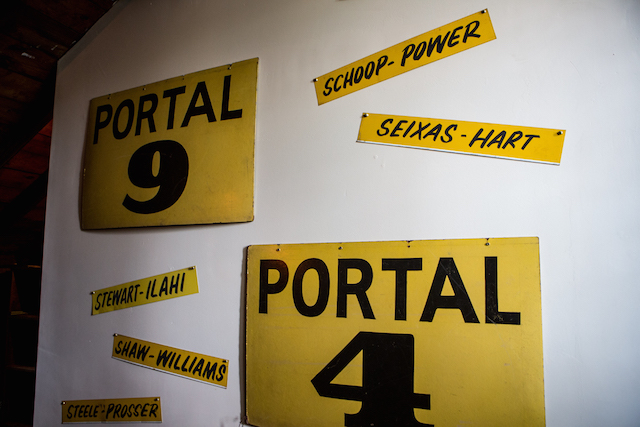 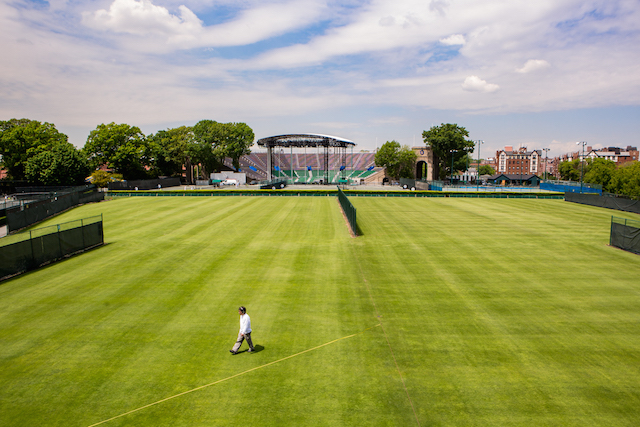 With the Forest Hills Stadium in the distance, a groundskeeper prepares grass courts at the West Side Tennis Club (Scott Heins/Gothamist)

By August 2013, the newly-reopened stadium was ready to host a show, and Mumford & Sons agreed to the booking. "They had a lot of faith in us," Luba said, acknowledging that the facility then was still in poor shape. Still, it passed the litmus test, the night was a huge success, and in both 2014 and 2015, Forest Hills hosted six shows.

In the meantime, Luba and his team have continued to make improvements. Forest Hills Stadium now sports entirely reconstructed aisles, modern seats, and new handrails. Each original concrete stairway has been fitted with soundproofing (although some neighbors have still complained about The Replacements' loud guitars and Lil' Wayne's lyrics). This year, the stadium has installed upgraded bathrooms and concessions stands and opened up the outer concourse level for the first time since '78. "One layer at a time has been made accessible, and we feel like this is the year when we finally reclaim the natural flow of how the stadium was meant to be used," Luba said.

"Technologically it's pretty close for 2016, but it still feels like it could be 1923 when you're in there," Luba said. "We worked pretty hard to keep that alive. It's not swanky, but it's pretty vibey.

With the main reconstruction tasks completed, the staff at Forest Hills is now free to focus on the details.

"This is the fun stuff," Luba said as he opened a door that lead to a small party area tucked beneath the stands. It's been dubbed the Raccoon Bar and is a relaxed hang-out space for workers who aren't on the clock during shows. The Bar started as an unused corner, but now sports a built-out bar, stools, and a small window slot with a view of the stage. "It's our personal hideaway," Luba said.

On the other side of the stadium's horseshoe arc, Luba pulled open the door to an unassuming porta-potty. Behind it was astroturf, twinkle lights, another bar, and a tall ceiling. Forest Hills employees call it the Porta-Party space (naturally) and use it as a dance area for those in the know. Like the rest of the stadium, the room's rough, unfinished character is part of the appeal.

Elsewhere, the stadium's old sign-painter's room has been repurposed into an artists' lounge, where family, tour staff, and friends of the artists can unwind in what feels like another era. Old equipment lays scattered about the room, and more than a dozen signs, painted with the names of tennis pros long gone, decorate the walls. For artists themselves, the backstage dressing rooms are found in a cabin hidden behind the stage; it's filled with memorabilia, including posters from those early Beatles and Dylan shows.

This year, Forest Hills boasts a lineup on par to the ones from its past, with Louis C.K., Van Morrison, Disclosure, Chris Stapleton, Flume, and Dolly Parton set to perform. What's more, Bob Dylan and Paul Simon will return to play shows, playing to the same arena they filled decades ago. That kind of longevity is what inspires Luba. "We spend a lot of time looking at the posters from '64 to '70, and we hope that 40 years from now people will look at posters from our run. And it'll hopefully seem just as epic."

YOUR GUIDE TO FOREST HILLS STADIUM IN 2016

How to get there: Take the E, M, F, or R lines to the 71st Avenue Forest Hills station in Queens, then walk South on 71st Avenue under the train tracks. Or take the LIRR to the Forest Hills Station. Note: There is no parking on site. The stadium is located at 1 Tennis Place in Forest Hills.