The New York Marble Cemetery is one of the city's great "hidden" spaces. Located in the East Village, it's sealed off from its neighbors by high stone walls to the north and south, and from the street by a narrow brick walkway behind a pair of iron gates. It's pretty, it's quiet, it's almost two centuries old, and it's wholly unique, burial-ground-wise, in the way it's laid out.

Unless you decide to get married there, or you've got $350,000 to throw down for one of the vaults that recently went up for sale, the only time you can enter is one Sunday each month between now and the fall. During this brief window the historic cemetery unlocks its gates weekly to the public for four hours in the afternoon. The next open house is scheduled for May 29th, but here's some background to keep you entertained until then.

In the 1820s, with yellow fever threatening to unleash its eye-bleeding misery across the city once again, the Common Council (now City Council) banned all earth burials below Canal Street, and soon thereafter below 14th Street. The fear was that dead bodies in too-shallow graves were the source of the disease, because there was some evidence that this latest outbreak—not an epidemic as in 1799 and 1803, but troublesome nonetheless—originated at the Trinity churchyard. But if the well-heeled and merchant class could no longer bury their beloveds at houses of worship, how were they supposed to lay to rest, for example, young Uriah, who sadly passed after a bout with the Scrofula?

Enter Perkins Nichols, who in 1830 opened what is today the oldest non-sectarian burial ground in Manhattan, the New York Marble Cemetery. Nichols's concept here skipped around the law nicely: instead of individual graves with headstones, he built room-sized marble vaults ten feet underground. The vaults are set in pairs, with each duo accessible by removing a giant stone slab buried beneath the lawn. The cemetery's only markers are plaques embedded in the side walls, which means it basically just looks like a nice lawn. 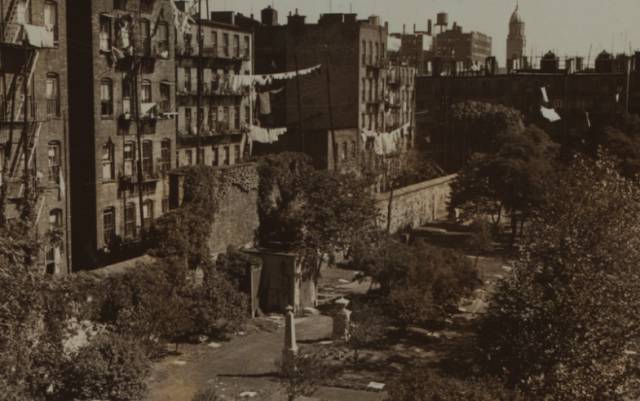 (Photo courtesy of the NYPL)

The place was an instant hit with the locals, so much so that Nichols opened a second business a few hundred yards away, the similarly-named but operationally unrelated New York City Marble Cemetery, which by the way also hosts Neighborhood Open Days over the summer.

Between 1830 and 1937 some 2,100 people were interred in the 156 underground tombs of the first Marble Cemetery, though many of the bodies were moved to the country toward the end of the 19th Century, finding a new home in the more fashionable grounds of Green-Wood, Sleepy Hollow, or Woodlawn. It's unclear exactly how many dead people still remain on the East Village site—and present-day descendants of the original tomb holders also have the right to spend all of eternity here, so the cemetery's population may actually increase—but you will be lounging on top of corpses when you visit.

The New York Marble Cemetery is located at 41 1/2 Second Avenue, between Second and Third Street. The Open Days this season are scheduled on May 29, June 26, July 24, August 21, and September 25, but check the website closer to the date of your visit to make sure.