Cat aficionados and pussy proselytizers gathered in midtown last night to celebrate the phenomena of cat viral videos at the second annual Friskies awards. Besuited host Michael Ian Black was the emcee and actress Angela Kinsey made several appearances, but the star of the night was definitely Grumpy Cat, that soft, fluffy, droopy-eyed beauty who launched a thousand memes. "She's really indifferent," co-owner Bryan Bundesen told us after the show when we asked how she handled all the attention. "She's always sleeping during the day, so it isn't much different when we go out to events."

THE FRISKIES Broll Package h264 from Gothamist on Vimeo. 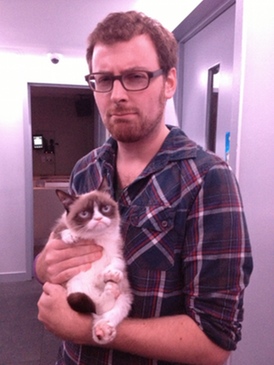 From what we could see while seated behind her, Grumpy Cat certainly seemed to be napping through most of the ceremony, despite being nudged to look at the camera for several reaction shots to the award winning cat videos. We got to hold her after the show for quite some time, and she was bizarrely docile and calm (and also much softer than we expected). Bundesen said there were no plans for her to retire from the public appearances anytime soon, but if it "ever seems like it's stressing her out, we would stop."

Between cat video tips and speeches from former winners, Grumpy Cat was given the Lifetime Achievement Award. Black told us he thought she was an amazing trooper all night: "Whether this speaks to her docile personality or a heavy dose of sedatives, I cannot say. What I CAN say, however, is that if you hold Grumpy the wrong way, she will pee on you. Just like with my kids."

The best part of the night was one of the least likely: early on in the show, the videofeed went out (we later heard it was a problem with the wi-fi); we couldn't see the videos on the big screen, the stream of the show was not working, and the event seemed headed for disaster. Thankfully, Black came to life, hilariously improvising around the technical difficulties: "You guys know this is a live show, right?" he asked.

"The technical difficulty section was actually my favorite part of the show because it allowed me to fully be myself in a way that the scripted portion did not," he later told us. He said he was very open to hosting the event again next year as well: "The Friskies people were all very nice and I actually think they have a very clever idea on their hands, which could be taken to a whole other level if they let it. The idea of a tongue-in-cheek awards show for internet cat videos is, to me, very funny. I think it could be the ESPYS of cat videos."

But don't expect Black to make his own video for next year's contest: "I don't personally have the patience to chase my cat around the house watching him do his hilarious cat stuff," he said. "If I ever did catch him in a moment of hilarity, I would have no problem exploiting his image without permission in the hopes of making millions. Again, just like with my kids."

Altogether, there were four viral videos to win awards: “Cat vs. Printing Paper” starring Remy, won for the Cat Comedy category. “The Tiniest Tiger’s Snow Adventure” starring Gracey, won Catventure; “We Love Squirrel” starring Eleanor, Gibbous and Miley, won for Pursuit of Food or Treat. And “Pancake the Kitten and His Doberman” starring Pancake, won both Rescue Cat and Fan Favorite. You can see all those below.

#cats
#friskies
#grumpy cat
#memes
#the friskies
#original
Do you know the scoop? Comment below or Send us a Tip
A new Gothamist is coming! We’ve moved comments over to our beta site. Click here to join the conversation and get a preview of our new website.