I was hanging around a crowded bar in Gowanus one recent Friday night when three women wearing earth-tone cloaks drifted in and started ringing a bell. Lavender Lake, the bar, was typically boisterous, and few patrons seemed to pay these solemn-looking priestesses any mind. Brooklyn, right? But I had booked passage on Jeff Stark's latest voyage and knew this was my signal to gather outside with my fellow passengers. We were going to sailing on a Superfund site!

A couple of months ago, Stark launched a wildly successful Kickstarter seeking funds to produce a site-specific theatrical production on the Gowanus Canal, that tragically carcinogenic waterway where dolphins go to die. The ambitious project, called The Dreary Coast, was to be an immersive (but hopefully not too immersive) interactive adventure, with a small group of trusting audience members piling into a boat to fearlessly explore one of the most polluted bodies of water in the United States.

Donors were told to "imagine the Pirates of the Caribbean ride at night in the middle of a crumbling industrial neighborhood" with "elements from Greek and Roman myths, pieces of Dante's Inferno, and blasts of black metal." I kicked in 20 bucks immediately, and Stark ultimately raised over $25,000 to deliver the most enthralling theatrical experience I've had since the year 2000, when Wallace Shawn used a crumbling old financial district gentleman's club to stage The Designated Mourner.

But instead of being led immediately to the boat, our group, numbering about 20, was escorted to a dimly lit empty room above the bar, where we were greeted by eerie droning music fit for a human sacrifice. No one said a word. One by one we were silently led to a small cluster of women who portentously shrouded us in identical tan hooded cloaks. The ritual went slowly, and after each passenger donned his or her cloak, we were formed into a slowly expanding circle, holding hands with one another. This made me a little uncomfortable—I don't think I've held hands with strangers since kindergarten—and my palms began to sweat profusely, like a skunk warding off predators. Sorry, fellas. 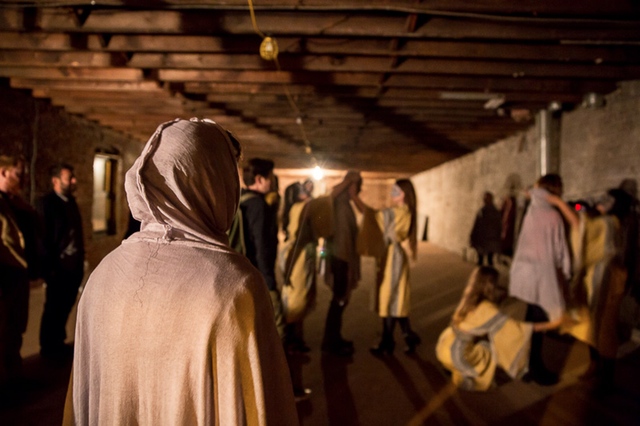 An atmosphere of creepy anticipation prevailed, and we were finally escorted back downstairs, hitting the street as a uniform unit in identical robes resembling a cult. Waiting for us was a tall man with his face painted black, also in robes, wearing a golden birdcage on his head. He silently escorted us through the streets of Gowanus in a long, very slow procession, two by two. As we turned left onto Bond Street, the driver of a black SUV paused at the intersection and gawked incredulously at whatever the hell these hipsters were doing. Before speeding off, his passenger, an Italian-American type straight from Carroll Gardens' Central Casting, bellowed out the window, "YOU GUYS GOTTA GET YOUR HEADS CLEANED OUT!"

What better place to do that but the Gowanus Canal? On this night, however, it was not the Gowanus but the swampy river Acheron, the "highway" of Hades, transformed into a gloomy, mysterious conduit through the underworld by Stark and his talented team. Our tour guide was Charon, the ferryman of Hades who, in Greek mythology, guided souls between the world of the living and the world of the dead. Played with great brio by E. James Ford, the lonely but loquacious Charon ushered us aboard his boat and we embarked to pick up Persephone.

Stark's script, at turns funny and hypnotic, loosely follows the contours of the Persephone myth, coaxing out an array of motley characters from Greek mythology, but still with one foot in the present. Persephone (Ava Eisenson), attired in a splendid diadem, has just arrived to spend her required months in Hades, and she steps delicately aboard with the appropriately grim air of resignation. As we puttered down the canal—its overpowering fumes at times bringing tears to my eyes—the plucky Charon filled the night air with a seemingly endless flow of banter, most of it amusing, some of it chilling. On several occasions Persephone would urge him to shut up, and he obliged, letting our hushed surroundings take center stage.

Like everyone else in Hades, Charon dreams of ascending to the land of the living (preferably with Persephone, for whom he pines), though when pressed about what he plans to do there, he's at a loss. He just longs, like many imprisoned souls, to be somewhere else with someone he cannot have. His journey is our journey, and along the way we met an extraordinary cast of gods and demigods, all marvelously costumed by Sarah McMillan. Stark, wearing a stunning feathered hat and feather epaulets on his shoulders, is also on board the boat—which is beautifully designed by Swoon—and monitors the proceedings as a sort of silent sentry, his dark eyes blazing intensely.

The story never takes itself too seriously, and under Stark's direction the performance ebbed and flowed seamlessly between delightful theatrical artifice and the truth of the present moment, which was that a group of strangers dressed in hooded cloaks had piled into a boat on a toxic canal to explore a different, somewhat forbidden, part of New York City, hopefully without falling in. 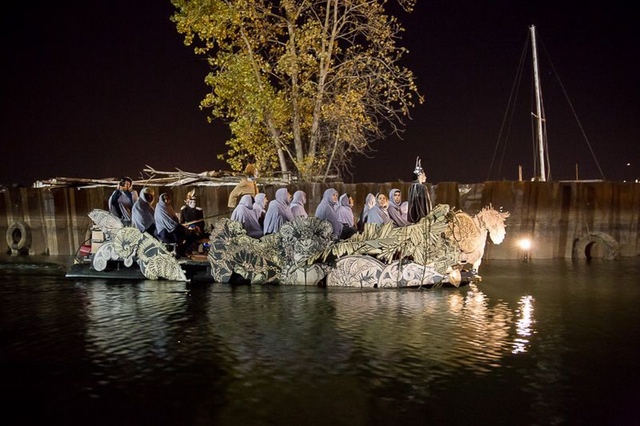 Looking back, The Dreary Coast takes on the misty colors and textures of a fantastic dream—the memory seems to mesh better with my brain's subconscious fantasies than with anything that actually happened in reality, here in turbo-gentrifying Brooklyn 2014. The canal itself was, of course, the star, and some of the show's greatest moments unfolded in deep silence as the actors and audience grew still and drifted through the murky darkness. In other moments the dialogue itself was electrified by the location, like when Hades, his giant skull adorned with magnificent horns, addresses the mortal "shades" from atop his throne:

You want to be treated fairly. You hope you will not be stretched across a lake for eagles to eat your eyeballs. I remind you, those were your stories. There was a man, just over there, who dumped benzene into the canal for 20 years. Charon remembers this scoundrel. He owned a gas station on this canal, and you could pay him to make whatever you wanted go away. So he dumped benzene. Do you know what benzene is? It is a carcinogen. That means it causes cancer. It does not maybe cause cancer. It is not known to cause cancer in the State of California. It causes cancer. And this man, he dumped it in the canal for 20 years. Charon's beloved Dante would have that man sipping benzene through straws. Nursing his children with benzene. Popping malignant sores on his thyroid with long needles.

Do you know what actually happened to him? He died. He made life miserable for everyone around him, and then he died. Then he took a ride in this very boat. Same as you. He paid his fare. He sat next to a boy who had been hit by a car on Third Avenue. Same boat.

This mix of melancholy and absurdity and heavy truths makes The Dreary Coast compelling as a play, but it's the way Stark & Co. engage the audience's collective imagination that elevates the experience into something magical. Yes, you're on a boat drifting down a polluted canal past the Whole Foods, which is interesting in and of itself, but at the same time you're also mysteriously transported into some other dimension, where the old, forgotten gods are real, and definitely crazy.

There are a few performances left this weekend—they're all sold out, but there is waitlist: info@drearycoast.org.

#jeff stark
#opinionist
#the dreary coast
#longform
#original
Do you know the scoop? Comment below or Send us a Tip