Photos: Go Back In Time To The 1950s With Immersive 'Marvelous Mrs. Maisel' Exhibit

The Marvelous Mrs. Maisel won't be back to rat-a-tat all over your screen until later this year (they're headed to...Miami!), but you can fill that Midge-sized hole in your heart this month at The Paley Center For Media, which is hosting a free immersive exhibit on the show, featuring sets, costumes, and ephemera. You can even sit at the Stage Deli and order food from a waitress there (just don't expect to get any real food).

The exhibit, titled Making Maisel Marvelous, is spread over two floors and features interactive sets including the hair salon from the Catskills; the booth from the Stage Deli; the B. Altman switchboard; Rose’s Paris apartment; and the TV set from the Arthritis Telethon where visitors can perform their own stand-up comedy set. There are also dozens of costumes worn by Rachel Brosnahan on the show, lots of photos from the actual period that was used as inspiration for the series, and the Paley Center will screen episodes from season two throughout August in the Bennack Theater. 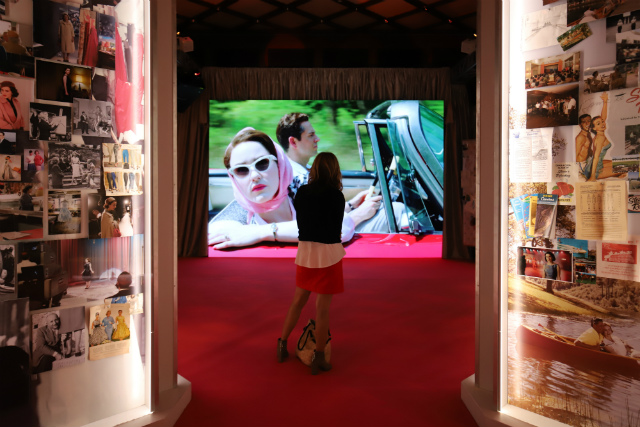 "The Marvelous Mrs. Maisel is celebrated for the beautifully crafted costumes and sets, from Midge's iconic black cocktail dress and fabulous coats, to Rose’s Parisian pied á terre," said Jennifer Salke, Head of Amazon Studios. "Amy Sherman-Palladino, Daniel Palladino, and their incredible teams are brilliant at creating a visual look and style that brings life into all aspects of the show. We’re so happy to work with the Paley Center to give fans this special look inside what makes The Marvelous Mrs. Maisel one of the most celebrated series on television."

The exhibit will run starting this Saturday, August 10th, through September 6th. Get more information about the exhibit and screening times here.

Last year, a 1958-style Carnegie Deli opened in SoHo as part of a promotional stunt for Maisel, with 99¢ pastrami sandwiches and 50¢ black and white cookies.

The exhibit is open Wednesdays to Sundays, noon to 6 p.m.; and Thursdays until 8 p.m. (Closed Mondays and Tuesdays.) The Paley Center is located at 25 West 52 Street, New York.