The glitzy Frieze New York opened its massive white tent to the public yesterday, the fifth year the fair has brought the art buying-and-selling world to Randall's Island. Some 300 galleries set up shop for this year's spectacle, showing works by more than a thousand artists from all over the world. And even if crowds were minimal in the afternoon, the people-watching was still a pretty good sideshow for the art.

In addition to the hundreds of individual booths running up and down the tent in four long rows—you really need at least two and a half hours to even just glance at everything—there were also a number of performance pieces happening both inside and out on the lawn, including a team of mimes pushing around a cartoony green car, and a five elegant dancers in mirrored tutus. There's also a recreation of a Maurizio Cattelan piece from 1994, which is basically a live burro tromping around in his pen under a chandelier. 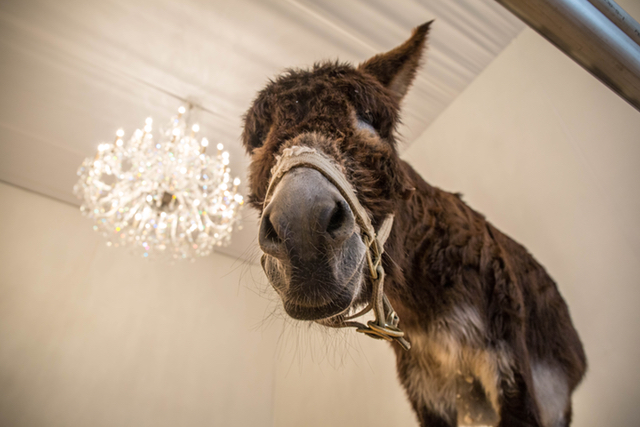 As is always the case with these big-money fairs, most galleries brought out their most eye-catching works for Frieze, so if you like to photograph yourself, your friends, or random strangers next to a bizarre sculptural piece, this is the place to be. Frieze also hosts an impressive line-up of food vendors—from Court Street Grocers and Roberta's to Marlow and Sons, El Rey, and Morgenstern's Ice Cream—as well as comfortable areas in which to eat.

Note too, there's a booth that looks like a space-age-y installation but it actually sponsored by that weird protein drink Soylent that Silcon Valley tech bros consume instead of eating actual food because they're so busy or something, and the company's giving away bottles of the stuff for you try. Spoiler: it's gross.

Frieze New York on Randall's Island will be open to the public today until 8:00 p.m., tomorrow from 11:00 until 7:00, and Sunday from 11:00 until 6:00. Tickets are $45, and should be bought in advance. There are shuttle buses running from the Guggenheim all day long, as well as ferry service from East 35th and East 95th Streets.

#art
#frieze 2016
#frieze ny
#randall's island
Do you know the scoop? Comment below or Send us a Tip