Starting tomorrow, the New York Botanical Garden is inviting visitors to delve into the mind of Frida Kahlo, thanks to a huge new show, Frida: Art, Garden Life that bridges the artist's art, inspirations and relationship to the natural world. Over a dozen of Kahlo's paintings and drawings are on exhibit, and her home outside of Mexico City, La Casa Azul, has been "reimagined" inside the Enid A. Haupt Conservatory. 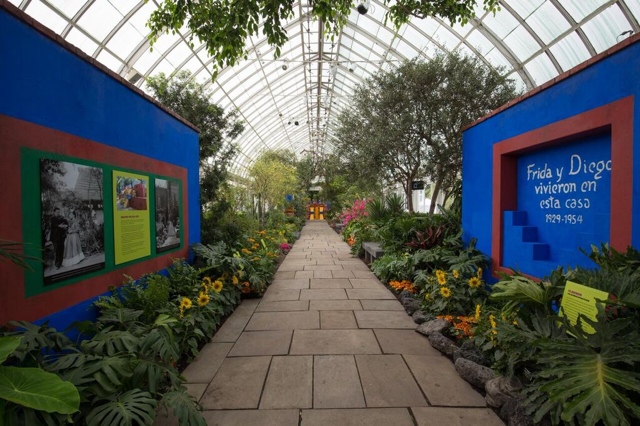 The NY Times explained the importance of Case Azul and the NYBG's interpretation of it, by Tony Award-winning stage designer Scott Pask:

A singular dwelling built by Kahlo’s father in what were then the outskirts of Mexico City, Casa Azul became the anchor of Kahlo’s and [Diego] Rivera’s married lives. They filled it with their astounding collections of ex votos, folk art and important Mesoamerican sculpture, and also with fellow Communist Party members, varied lovers, artist friends and a menagerie including parrots, monkeys and a pack of hairless dogs called xoloitzcuintli.

“There are a lot of people that have Frida refrigerator magnets that have never seen a Frida painting,” Mr. Pask said. “When you see the house and the beautiful emotive space of the garden, you understand that the art, the love and the life are so intertwined.”

His rendition of a volcanic stone pyramid Rivera constructed in the garden to display his collection of pre-Columbian artifacts is Mr. Pask’s most theatrical gesture. But his more subtle accomplishment may be the evocation of “this atmosphere Frida surrounded herself with, incorporating the botanical influence of the markets of Mexico, her gardens, the fruits and plants and animals she lived with into the prism of her work.”

Another spectacular part of the exhibition is an installation commissioned by the NYBG: Artist Humberto Spindola paid tribute to Kahlo's iconic self-portrait Two Fridas, by creating the dresses—one traditional style dress and one more modern—from tissue paper with a technique that makes it look like fabric. 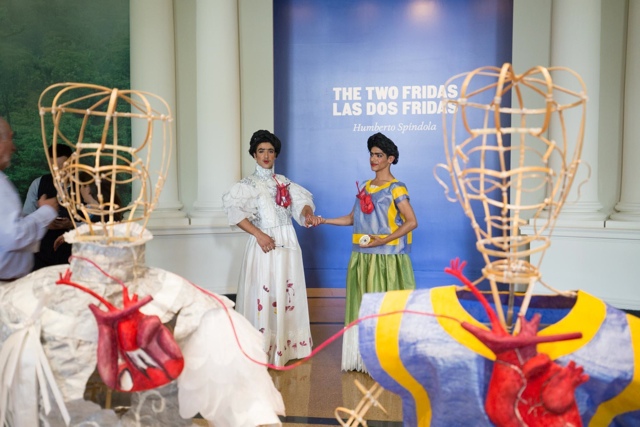 During the press preview, Spindola also had two male models dressed as the Two Fridas, which photographer Sai Mokhtari thought really worked: "I loved his choice of casting men as Frida because she had a complex relationship with sex and sexuality that was really hers alone to know and I thought this choice was a fantastic statement about sexual identity and gender roles."

In addition to the conservatory's re-creation of Casa Azul and the artworks on display, the NYBG has a number of programs—textile demonstrations, live music and dance—planned as well as "Frida Al Fresco Evenings" with music performance, an art installation from Jenny Holzer (projections on the conservatory!) and Mexican food and drink inspired by Kahlo at the food venues and the "Casa Azul" food truck.

Frida Kahlo: Art, Garden, Life opens on Saturday, May 16, at the New York Botanical Garden and runs through November 1, 2015