It was the mid-1850s, and the rapidly growing city of Brooklyn needed water. Two years and one engineering marvel later, the good citizens of what was then the third-largest city in America (after New York and Philadelphia) celebrated the opening of the Ridgewood Reservoir, a double-basin design that quickly leveled out at a daily capacity of 154 million gallons, enough to quench all of Brooklyn's thirst at that time for ten days. The site sits on the Brooklyn-Queens border, in Highland Park, but the reservoir itself is in the Glendale neighborhood of Queens.

In the early 1890s, the reservoir was described as "rickety," due to failing pumping engines,
by the NY Times. By 1898, Brooklyn merged with New York, a decision partially made so they could gain access to that city's water supply. The reservoir hung in there as a functional, albeit minor, part of the city's infrastructure for half a century, but was finally relegated to an emergency-backup role in the late 1950s, and a third basin was filled from the vast Catskill system. 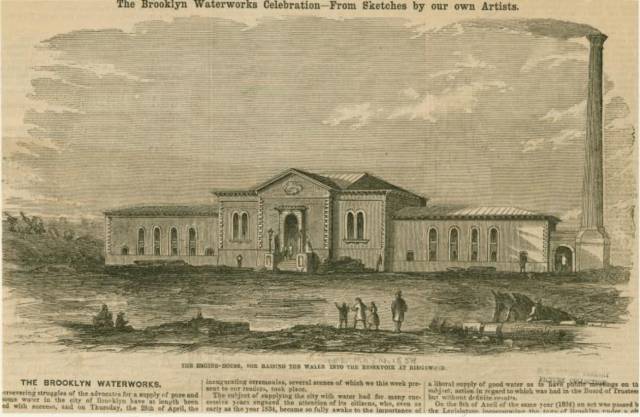 In the 1970s there were several drownings, and in the late 1980s the city drained two of the three basins (mostly, it seems, to stop the locals from swimming there). After this, they discontinued any sort of upkeep of the property, letting nature have its way with the 50-acre reservoir site, which accounts for about half of Highland Park's 101 acres. In 2004, Mayor Bloomberg transferred the land over to Parks.

I learned all of this recently on a tour of the Ridgewood Reservoir grounds led by Matt Molina, the president of NYC H2O, a non-profit education and advocacy organization focused on the city's water system. The reservation-only tour was part of the weekend's Open House New York festivities, and though my group had to keep to the public areas, there was still considerable ground to cover at the site.

One of the most amazing things about the place is how dense and varied the vegetation has grown over the past twenty-five years, with some 175 species of plants providing shelter to 125 species of birds, as well as raccoons, possums, lizards, and rabbits. Another fun fact: It's home to one of the few birch forests in the area.

It's hard to imagine that the whole site was once water, coming right up to the iron fencing that now borders the mile-long jogging and bicycle track. And because the city didn't entirely drain the third, central basin, that area has transformed itself into a wetlands, which, if officially designated as such—and NYC H2O is fighting hard to get this done—would mean considerable protection from development under federal law.

#highland park
#ohny
#ridgewood reservoir
#original
Do you know the scoop? Comment below or Send us a Tip