Everything I know about wrestling, I learned from GLOW—by which I mean the Netflix series, and not the original '80s "Gorgeous Ladies of Wrestling" that inspired it. In two seasons' time, I have gleaned that wrestling can be wildly problematic; that it traffics in racial stereotypes and sexism, or at least it did two decades ago. And as a '90s kid, I vividly recall what that golden era of professional wrestling looked like, thanks to the WWE's (née the WWF's) aggressive TV advertising. I cannot unsee the images of leathery men inflated to unnatural proportions, their cartoonish muscle bods basically balloon sculpture versions of the human physique, smashing one another over the head with foldable furniture.

In short, I had very specific and largely uninformed ideas about what wrestling is when I walked into the Our Lady of Mt. Carmel gym in Williamsburg on a recent Thursday evening, somewhat trepidatious about all the bloodlust.

Which is a distinctly odd feeing to have, walking into a church—even if it's siloed in this sporty antechamber, I doubt God appreciates carnage in Her house, all these mega-muscled dudes inciting violence on Her turf. According to Bull James, a former WWE wrestler and a founder of Outlaw Wrestling, church administration has historically hosted similarly antagonistic athletic events: "I came to Golden Gloves here as a kid," James told me.

James explained that he helped launch Outlaw because he spotted "a need for wrestling in the area," the changing demographics of which have diffused the church's tight-knit congregation. When offered the opportunity to put on a community event, James said, "They were like, let's have fun and rock 'n roll."

Outlaw held its first official matches in the spring of 2018, and on the Thursday I attended, drew a decidedly mixed crowd of probable hundreds. A woman with a crispy purple pixie cut spoke in conspiratorial tones to her seat mate, bedazzled shark teeth the size of baby fists sparkling in her ears. Behind her sat an aging hippie with a salt-and-pepper ponytail and matching handlebar mustache; behind him, a fidgeting corporate-casual woman in a white button down and loafers. "A death match is anything goes," an enthusiast explained to a nearby hipster newb, promising: "Blood, a lot of blood."

Except there wasn't any blood, and in hindsight, this strikes me as improbably lucky: The bruising smack of human meat on the mat creased my face in a perpetual wince. According to GLOW, wrestling is a practiced performance, the moves plotted beforehand and staged if not to preclude the possibility of injury, then at least to minimize it. I felt the mat, though: It's just springy wooden planks topped with a firm layer of foam, like a thin futon on the floor. If you climbed up on your kitchen counter and swan dived onto such a meager cushion, you would surely feel the pain reverberate in your core. Watching a woman climb the ropes in the far corner of the ring to body-slam her hulking opponent, listening as a man's weight crashed into the boards after his adversary flipped him over her shoulders, my elbows ached vicariously. What sorcery keeps their bones from shattering on contact?

"Wrestling is scripted, but it is not fake," Willow Nightingale, the aforementioned man-thrower and a star of GLOW's modern-day equivalent, WOW Superheroes, told me. "We're really going through everything we're putting our bodies through, all this stress and all this punishment." Wrestlers' bodies calibrate to the pain. If I hopped into the ring and hurled myself against the ropes, I would be in a world of hurt, Willow said, but wrestlers "train so that this becomes the everyday. So [they] can get through a whole weekend of wrestling without being like, 'I need to go to the hospital right now.'"

This wisdom did not quiet my mind as I watched a giant baby named Gacy clobber his nimble partner. Wrestling matches pit a hero against a heel, and their interpersonal drama whips the crowd into a frenzy. You begin to feel real fear that your hero, repeatedly pinned by the villain, might not turn things around; that actual ribs may have cracked, that teeth have come loose from their gummy moorings. Your palms sweat such that you cannot hold your pen. But then your hero undertakes a magnificent flying somersault out of the ring, toppling this petulant toddler in a spectacular belly flop, and order is restored. 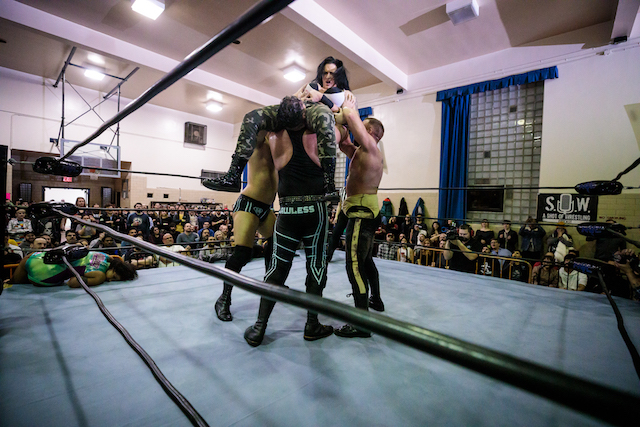 The hero-heel storyline seems standard in this sport, but so too does stereotyping. Professional wrestling has long pigeonholed performers into racist tropes, erroneously assigning athletes offensive characters based on their skin color, while handing top billing to white actors. Women, too, have weathered harassment and chronic pay disparities: The WWE only stopped calling them "Divas" in 2015, and is slowly evolving away from sexist, slut-shaming narratives.

Even if you buy pro wrestling's defense that biased narratives just satirize cultural oppressors, it still hurts to watch them played out in front of a jeering audience. And when you watch a trio of men spout misogynist nonsense about their female opponents, you might spend the drawn-out battle of the sexes that follows wondering what the takeaway will be if the heels prevail. When the opposing teams match a drag queen outfitted in precarious stilettos against sheer machismo, you might feel a prickle of apprehension anticipating cruel, WWE-style mockery on the horizon.

But Outlaw seems designed for a different audience. James says he leaves plots and stage personas up to performers: They decide amongst themselves which pairings and teams will jell together, and what backstories will appeal to the crowd. When it comes to their characters, James said, wrestlers are "free to express themselves," to put on whatever kind of show best emphasizes their talents while entertaining the fans. In short, the evening seems to hinge on who shows up to watch it: "I believe in magic," Willow said, "and it's the feeling that I get in the ring when there's a crowd like this." Their vibe decides the night's trajectory, and Thursday's—which seemed mostly excited, supportive, invested, and rowdily respectful—did not disappoint. If you feel you can meet that behavioral bar, the next match will be April 25th, same time same place.

#blood
#outlaw wrestling
#sports
#williamsburg
#wrestling
#original
Do you know the scoop? Comment below or Send us a Tip