The Department of Transportation tested out its Shared Streets program yesterday, designating a 60-block area of the Financial District to be a 5 MPH zone for all vehicles, with pedestrians and cyclists encouraged to join them on the asphalt. And while there were certainly some pleasant moments throughout the afternoon, it was unsurprising that for the most part drivers refused to play along.

On busy Maiden Lane, for example, despite having just passed through the NYPD-manned barricades with big speed limit signs, most cars cruised by at regular speed, forcing pedestrians to stick to the sidewalk. For the most part drivers seemed frustrated (one yelling "get the hell outta the street"), confused, or simply annoyed. 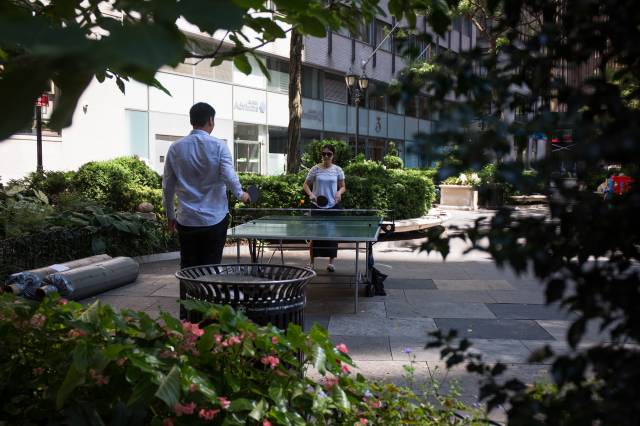 Even if overly-entitled drivers didn't join in, there was definitely some fun to be had. The neighborhood, with its historic winding streets, is ideal for strolling and discovery, so the potential for a new NYC tradition (à la Summer Streets) is definitely there. In Hanover Square there were "garden games" like a ping pong table and giant Connect Four, and in front of old Fraunces Tavern the Fifes and Drums of the Old Barracks performed in full Revolutionary War regalia (perfect attire for a heat wave).

The Hungry March Band was also on hand, and did their brassy, rowdy thing on the Federal Hall steps to the delight of dozens of tourists—the insane heat really kept the crowds to a minimum everywhere—before playing their way down to the Wall Street Bull.

It's currently unclear if there will be a second "Shared Streets."

#financial district
#shared streets
#original
Do you know the scoop? Comment below or Send us a Tip