Several hundred revelers took over the Village streets between Tompkins Square Park and the Stonewall Inn last night for the 24th annual Drag March. As always, the event was equal parts party and protest, with most of the vitriol this year directed at President Trump, First Lady Melania, and ICE. Activists for trans rights and sex workers were also a vocal presence along the route, and the whole night was basically a big middle finger to anyone who would try to dictate how we live and who we love. 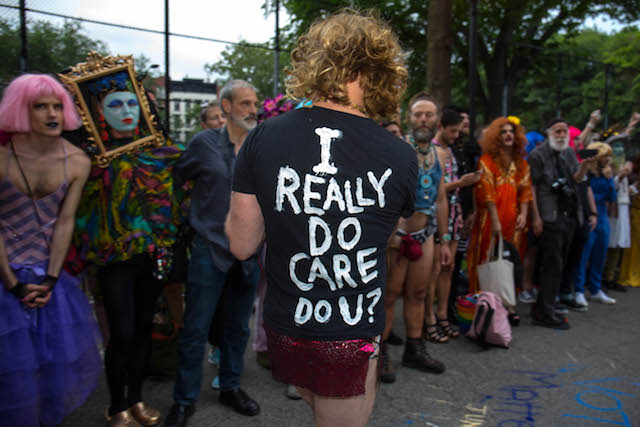 One of the most enthusiastic chants on the march, responding to the recent Supreme Court ruling in favor of the Colorado bakers who refused to cater a gay wedding, was "2-4-6-8: Keep your fucking wedding cake."

But like all NYC Pride events, Drag March was also a celebration — a boisterous, inclusive affirmation of the LGBTQIA community. The traditional singing of "God Is a Lesbian," led by the Church Ladies For Choice, signaled that it was time to step off from Tompkins Square, and the march ended with a moving rendition of "Somewhere Over the Rainbow" in front of Stonewall, with hundreds of voices shouting the lyrics into the night.