Photos: Dogs Get Their Own Instagrammable Pop-Up At Immersive 'Human's Best Friend' If ice cream and pizza can get their own pop-up "museums;" if a Dark Crystal Cult Manifesto can promise a one-of-a-kind Instagrammable experience; if essential elements like color and candy and hubris can be smelted down into pure social media cache; then how the heck has it taken this long for someone to create a pop-up event hopelessly, romantically, even cultishly devoted to dogs? Or even better—an immersive artisanal Instagrammable interactive curated authentico experience for dogs?

For the next two months, that's what Human's Best Friend is offering to humans-with-dogs and dog-obsessed humans alike. Starting this past Saturday, and running through November 12th, the West Village pop-up will turn into a puppy mansion overflowing with multi-colored balls, adoptable dogs, and overheard sentences like, "He's really not great with males," and "Where should we have the dog influencers sit?"

There are eight rooms with 20 "photo moments" spread throughout the space. Those rooms include The Dog House (which has a Lady & the Tramp-style dinner set-up, plus, duh, giant toilet bowls), The Bone Yard (humans can take pics of dogs under glittering bones hanging from the ceiling), The Toy Pit and The Water Bowl, both of which include overflowing vats filled with balls (courtesy of their partner Petmate, which donated over 10,000 balls for the project). You can situate your pup underneath an "I Heart NY" sign; you can let them off-leash to play with other pups in the suburban front area known as The Backyard; and you can read details about pups at the first-ever exhibition for the popular photographer The Dogist (another one of the many partners in this endeavor).

Best of all, there will be adoptable dogs brought in every week from one of 12 different rescue groups (Second Chance Rescue, Animal Haven, Bideawee, Rescue City, Badass Brooklyn Rescues, The Sato Project, Muddy Paws, Rescue Dogs Rescue Soldiers, Mr.Bones & Co, Hearts & Bones, and Rescue Dogs Rock NYC), and rescue workers on site to help guide interested people through the process of adopting and fostering. Tickets are $29 per person, or $39 for a dog and owner (children under two play for free), and 10% of profits benefit the participating rescue organizations.

"This is about dogs getting adopted, and people learning about the adoption and fostering processes. So many dogs need our help," said co-creator Brain Tovar. He added with a laugh, "And then [it's about] having a space where human and best friend can enhance their bonds in an Instagrammable environment."

Tovar and co-founder Jason Sherwood are no strangers to the effervescent world of pop-ups—their company Live Sight has worked on the Clio Awards, helped launch pop-ups like the Museum Of Ice Cream and the Hall Of Magic, and also collaborated with Rihanna and Sam Smith. This is their first solo project, which took two and a half months to bring to life. "We had so many dogs and humans peeking in the window while we were constructing this this week," Tovar noted. 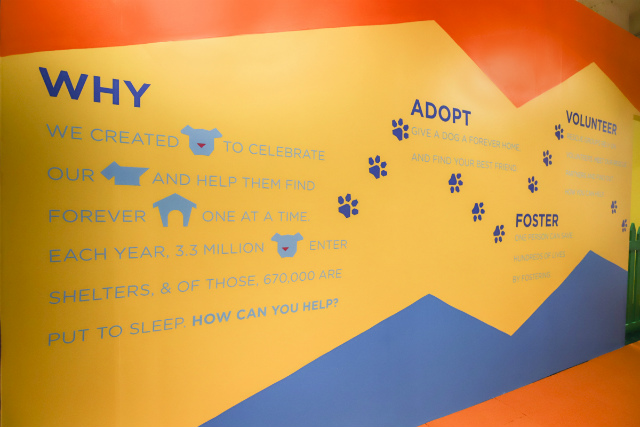 As for the name, Tovar said, "We thought, dogs are referred to as 'man's best friend.' It doesn't sound right in this day and age. They're everyone's best friend. But if you type it in Google, it automatically changes it to 'man.' We're trying to change that to 'human's best friend.'"

To control the experience for everyone, only 12 dogs will be allowed in at a time (there's no specific cap on humans without dogs) so it won't get too overwhelming; each human and/or dog will get 30 to 45 minutes in there. There will be seven to eight staffers onsite (who have worked with dog trainers in advance of the pop-up), and small and big dogs will be separated into rooms as needed.

Every dog who comes in on a Saturday will get their own Barkbox. There will also be more programming and collaborations to come ("with dog influencers"), including a big event on "National Fetch Day" (which, I have now learned, is October 20th) and Halloween.

"It's good for the community, good for dogs, and good for humans," Tovar added. He hopes that there is enough interest that they can extend their run in the city through the holidays, and then take the pop-up to other cities in the country. If they do so, who knows, maybe we'll get to see one of the rejected room ideas brought to life: a neon dog installation that is "Blade Runner meets dog park."

Human's Best Friend is located at 15 7th Avenue near 12th Street, and is open noon to 9 p.m. Wednesday and Thursdays, and 10 a.m. to 9 p.m. Friday, Saturday and Sundays. You can get more ticket info here.

As for how dogs will feel about the pop-up, I asked my pup Teekay what he thought about the overall experience, and whether it catered to his needs and desires satisfactorily. He communicated the following to me:

GIVE ME TREAT NOW

#dog
#dogs
#human's best friends
#manhattan
#pop-up
#popups
#west village
#original
Do you know the scoop? Comment below or Send us a Tip