Photos: Did Banksy Put Wanted Posters In Arabic On This Citibank? The Citibank on Mercer Street (near Canal) could be the location of a new Banksy piece. This morning a tipster sent in photos of these "WANTED" plaques (with Disney's Jafar) stuck to the side of the building, with Arabic sprayed on to them. Rayne Holm, who studies Arabic at NYU, tells us: "It says Jafar phonetically, with an Arabic intonation (J-aye-fr)," and the signature (which is highly stylized Arabic and more difficult to deciper) says "Banksee." Another Arabic reader tells us, "It's hard to say since it's pretty calligraphic, but the lower-right hand corner looks like Banksy."

But is it? Some believe it could be a collaboration (like the one he may have just done with Cope2), while our in-house expert Jake Dobkin says, "It has no relation to the wall that it's on, it's a square paper work with no cuts, and the stenciling is crude. The only thing that resembles Banksy is the red text, and as far as I know he doesn't use Arabic in his work." Even if they aren't the real thing, they've likely already been ripped off the wall.

The street artist hasn't updated his website or Instagram yet today, so it's unclear if this is officially his 18th piece of his Better Out Than In residency.

UPDATE: Nic Garcia is at the CitiBank and says as of 11:15 a.m. all of the posters have been removed, "each was affixed with a single piece of padded double stick tape." Double stick tape doesn't really seems like Banksy's style... 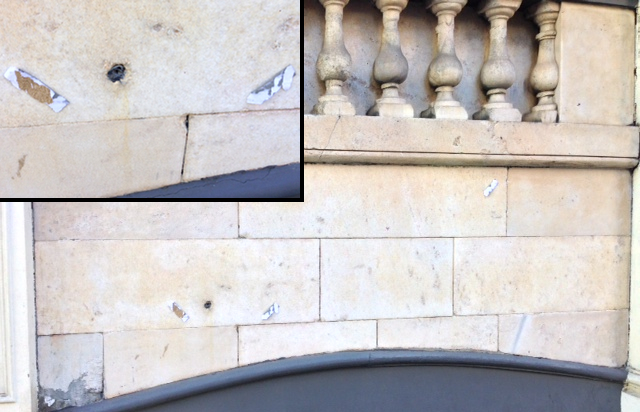 #banksy
#citibank
#maybesky
#street art
#wanted
#original
Do you know the scoop? Comment below or Send us a Tip