Photos: Did Anyone Forget Their Dead Crabs On The Subway?

We've been witness to an all-you-can-scream buffet of subway nightmares, from used condoms tied around poles to extreme manspreading, from shoe lickers to people popping each other's pimples on a crowded train. But this is a new one: a straphanger came upon an empty train car this weekend filled with dead crabs. "Yeah, it was pretty terrifying," the straphanger noted. 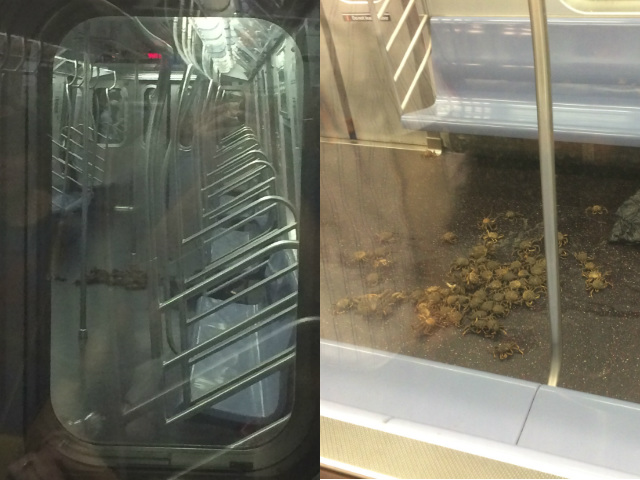 Astoria resident Shawn Petcaugh, 24, told us he was waiting for a N/Q train at Queensboro Plaza around midnight while on his way home from the Mets game Saturday night when he came upon the crab car. "[Me] and a few nearby straphangers were disappointed to find that the subway car that stopped in front of us was completely empty," he said. "We all figured it was a horrid smell, but when we started walking past the car to get to the next one. We looked in and spotted an extremely odd sight... about 50 dead crabs. How? Why?"

Why and how are both extremely reasonable questions to have in this situation, but no answers would be found on this night. "I was able to stop long enough to tell that none of them were moving," he added. "I didn't notify anyone [from the MTA] but the doors to that car didn't even open when the train stopped, so I assumed one of the conductors had already been notified." Or maybe the MTA was IN ON IT, and this was just native advertising for the horseshoe crab monitoring project?!?

In case you are wondering whether someone was transporting these deceased decapod crustaceans in order to cook them: when one searches "dead crab" on Google, three of the top four results are all questions about whether it is safe or not to eat them. Commenters on Chowhound all pretty much agreed it is a bad idea, Reference.com says it's okay to cook only if they have been dead only a few hours ("If unsure how long the crab has been deceased, avoid cooking it"), and users on the Tidal Fish message board got into a steamy debate "trying to make sense of this [dead crab] phenomenon."

Here's some solid advice for anyone who sees a train car full of dead crabs and thinks that might be something they want to eat: "Pull one of the walking legs of the crabs that are suspect. If it springs back, it is still good and the muscle decay has yet to happen. When the leg comes right out, the decay has already started and the crab is bad, I.e., mushy meat."

#dead crabs
#nightmare subway rides
#subway
#train
#why
#original
Do you know the scoop? Comment below or Send us a Tip