If Penn Station on Thanksgiving Eve is the worst place to be, then the Upper West Side may have been the best place, because thousands of people eagerly crowded onto streets to catch a glimpse of the balloons in Macy's Thanksgiving Day Parade.

Taking in the enthusiastic crowd, full of kids yelling about their favorite characters (p.s., everyone loves Chase from Paw Patrol) and families taking selfies, the parade's executive producer Susan Tercero said, "It's just building with anticipation for the parade. Everyone's out here to see it!"

Crews started preparing the 16 giants character balloons as well as the dozens of smaller balloons for the big show at 1 p.m., inflating them and then securing them, given the projections of strong wind gusts. John Piper, vice president of Macy's Parade Studio, told us he and his team of handlers discussed it this morning, and they've "taken into consideration that the winds could pick up over night as well—and the balloons have got to stay here!"

Pointing West 77th Street towards Central Park West, Piper said, "So if you look down the street, you'll see that we're not only netting the balloons and making sure the sandbags are all in close and tight to the net, and we're also tying them off to the anchors we have prepared in the sides of the streets, so we have everything buttoned up."

"In the morning, the pilots and captains will be instructing the handlers that we'll be holding them in really close to the waist," Piper added. "Every time we come to an intersection, we're going to make sure it's clear so we never stop in an intersection"—NYC intersections are wind tunnels!—"then as we go through, we move to the windward side and come out and straighten up again. That's something we practice at our trainings. At the costume area, they'll all make sure the handlers have extra layers on and hand warmers ready—ready for a New York parade." 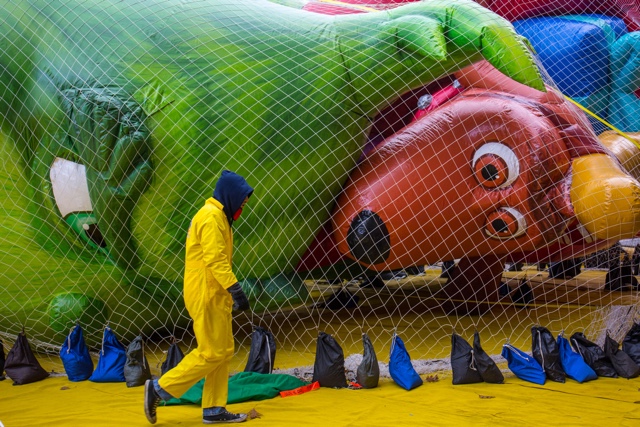 One of the new additions to the parade is Little Cloud, created by the L.A.-based art collective Friends With You, which is Sam Borkson and Arturo Sandoval. Macy's has selected artists to contribute to their Blue Sky Gallery of balloons (past artists include Jeff Koons and KAWS).

Borkson and Sandoval stood on West 77th Street, admiring the balloon, which is 30 feet wide and about 22 feet tall, and taking photos. Sandoval said, "It feels like something out of this world. We've been making art for the past 17 years for the sole purpose of bringing people together, creating true human interactions, and this symbol has become a key component of our language and see and be optimistic about; share a smile and feel a sense of lift, pardon the pun. It's really an honor for us to show this symbol to this many people."

The pair will also be in the parade as well. "We will be attached to a giant inflatable rainbow," Borkson described, "followed by some dancing raindrops and then the Little Cloud." (In 2010, when Takashi Murakami's Kaikai and Kiki were balloons, Murakami dressed as a flower.) Borkson said they were also going to wear layers of Heattech, plus have a lot of hand warmers and foot warmers, while Sandoval interjected, "We're going to cover our bodies in Tiger Balm!"

"This is very intense now," Borkson said, taking in the spectators for the balloon inflation and the sight of Little Cloud under the net. "I can't imagine the parade, when everyone is like cheering and screaming and there will be performers dancing and singing. It's just a huge dream come true."

Macy's Thanksgiving Day Parade starts at 9 a.m. EST, with step-off at Central Park West and West 77th Street and making it's way to midtown, ending at 34th Street and 6th Avenue (here's the parade route). NBC is broadcasting it on TV and on its app. NBC and Verizon are teaming up to stream a 360 parade experience on YouTube.