Photos: Converse With The Hologram Of A Former Gitmo Prisoner At The Park Avenue Armory In 2001 Mohammed el Gharani was arrested in Pakistan and shipped to the American prison at Guantanamo Bay, Cuba. He was 14 years old when he was thrown behind bars, and he remained in U.S. custody for eight years until a District Court Judge finally ordered his release. El Gharani came of age inside the dangerous and oft-illegal grey area of the American war on terror; this weekend you'll have the chance to meet him live via hologram. 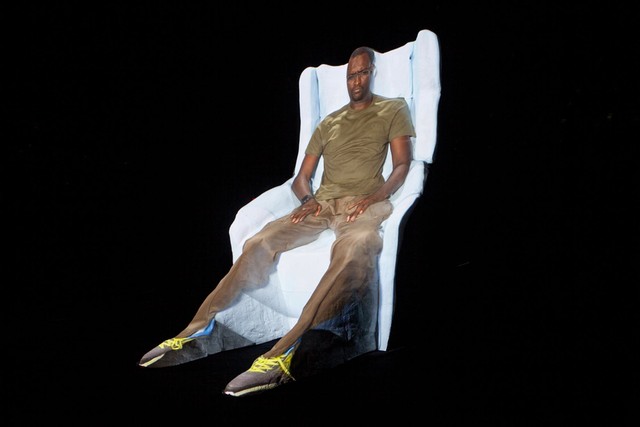 El Gharani's story is at the heart of performance artist Laurie Anderson's new work, Habeas Corpus, a sparse but powerful mixed media arrangement whose vital motor is a massive projector connected to an advance online streaming program, one which allows anyone walking through the Armory's enormous Wade Thompson Drill Hall to see, be seen by, and converse with el Gharani in real time as he sits in his adopted home in West Africa. The former detainee is, by law, barred from setting foot inside U.S. borders. Habeas Corpus's brief three-day run will likely be his best and only chance to speak his peace to the country that wrecked his life.

At first blush, Anderson's work might strike some as a kind of unfinished brainstorm. A massive disco ball is bathed in spotlights at the center of the Drill Hall, and musicians use analog pedals and amps to pump droning feedback through hi-fi speakers. One separate room hosts the tiny projection of a woman on a chair similar to the one el Gharani spears to be sitting upon; sprite-like and never entirely explained, she tells stories of New York in the immediate days after 9/11. To cap it all off, each night ends with an on-site dance party, and a bill featuring tUnE-yArDs frontwoman Merril Garbus, Pakistani virutoso Shahzad Ismaily, and the prolific Syrian electronic musician Omar Souleyman.

This zealous disarray is intentional. Apart from the personal testimonies of el Gharani, Anderson stressed that she considers the space she's created to be "a work about borders that became a work about stories." She sees the show as completely "opinion free," an offering of artful discovery and play the likes that her human subject missed out on during his eight year stint behind bars. Habeas Corpus most certainly does deal in heavy concepts like lost identity, memory, censure, and state-sanctioned violence, but somehow Anderson finds a way to turn it all into a kindly teachable moment, and the el Gharani she presents is more wise sage than steadfast idealist. For all its high-tech and heavy concepts, Habeas Corpus plays it light—holograms and all.

#Habeas Corpus
#laurie anderson
#Park Avenue Armory
#original
Do you know the scoop? Comment below or Send us a Tip