As with every Mermaid Parade, revelers often opt for revealing costumes, and some of the photos in the gallery are NSFW.

Coney Island was packed to the gills on Saturday for the 37th annual Mermaid Parade, as enormous crowds lined both Surf Avenue and the famous boardwalk, cheering on what felt like a record number of marchers. There were thousands of mermaids and mermen all over the place of course, but all manner of sea and land creatures were on hand as well. Marching bands, floats blasting music, dozens of large thematically costumed groups, admirably well-rehearsed dance routines, muscle cars, plenty of booze, lots of near-nudity, and the usual amount of terrible pun outfits completed the massive spectacle.

Arlo and Nora Guthrie, who grew up on Coney Island, served honorably as King Neptune and Queen Mermaid, just hours after the corner of Mermaid Avenue and West 35th Street was officially co-named for their father, the folk singer and activist Woody Guthrie. As is custom, politicians steered clear of the parade, except for Coney Island's fake mayor Dick Zigun, and State Assemblymember Mathylde Frontus (as Coney Island is in her district). The NYPD were out in force as expected, but there were also cadres of Guardian Angels patrolling up and down the route. 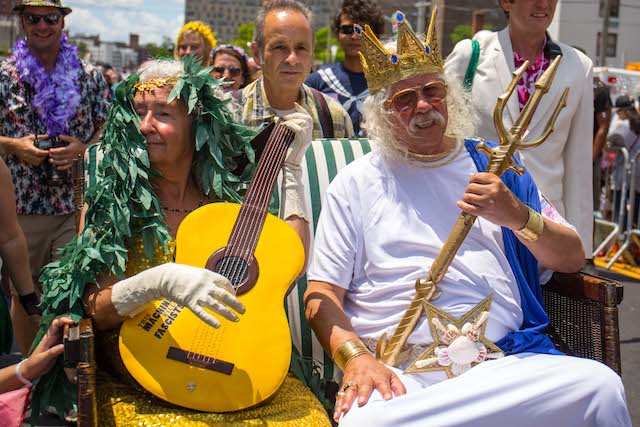 A strong undercurrent of protest ran throughout the festivities, with an emphasis on the lack of meaningful action in the face of climate change, and the choking of our oceans with plastic. Gearing up for the huge 50th anniversary of the Stonewall uprising next weekend, LGBTQ Pride symbols were everywhere, and the Lesbian and Gay Big Apple Corps showed up with a 130-piece ban.

#coney island
#mermaid parade
#summer 2019
Do you know the scoop? Comment below or Send us a Tip