When Blake Deadly ("like Lively but Deadly") took the stage at Alan Cumming's newly opened Club Cumming in the East Village Friday night, her enthusiasm was so infectious that only a handful of people whipped out cell phones to capture the performance. The intimacy and positive energy in the room made the usual social media habits feel gauche. As Deadly spun and slashed in her enviable, sequined pantsuit, fluttering her beautiful lashes and baby blue lips, there seemed to be an unspoken agreement—at least between those closest to the stage—to protect the intimacy of the experience and let it be what it was: an unabashed Village lovefest, experienced fully in the moment instead of documented for later.

"A lot of nightlife can be a bit jaded and not necessarily kind-hearted," Maisani said. "And we want to be the opposite of that. We welcome all, and we're all about trying to have a good time here." 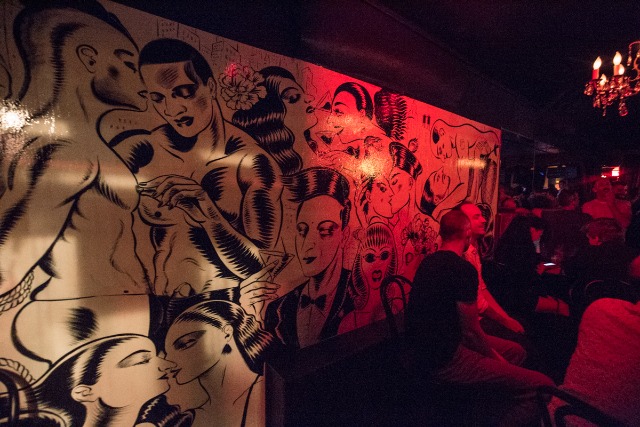 The cheeky newsletter that showed up in my inbox on Saturday morning promised "downtown debauchery at its finest." The list of events includes themed DJ dance parties, lounge acts, and raunchy readings, with an emphasis on showcasing local artists. Covers and ticket charges vary, with some dance parties cover-free, most events in the $5 - $10 range, and a few special events, like the Musto Duets, which raised money for Sage, offering general admission for $50.

Friday night featured DJ Michael Cavadias, who got the crowd moving to Robyn, Blondie, and the Spice Girls. The talented composer Danny K Bernstein accompanied singers on piano before playing his own humorous piece about a holiday dinner with an ex- and their new squeeze. The variety line-up, dubbed Kismet, was presented by actor, writer, and producer Paul Iacono, of RJ Berger fame.

"So many artists like myself—musicians, cabaret, downtown folk—have dreamed of a place like this, which really hasn't existed since the '80s," Iacono told us. "It's sort of a genuine hybrid of disco dance party and live music performance cabaret." 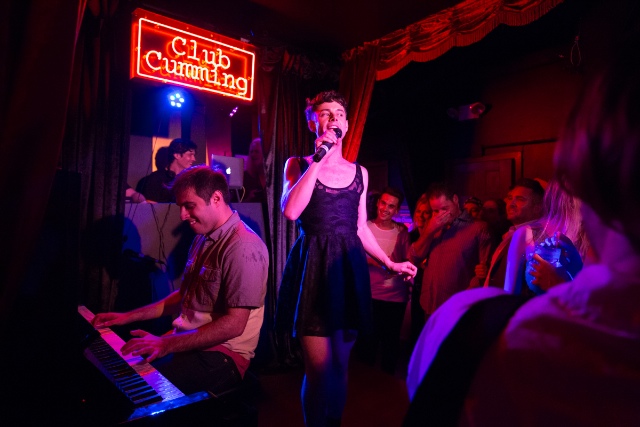 Former Eastern Bloc regulars like Leah Pinero, 27, and Derek Fearon, 25, were pleased with the makeover, but appreciative of the way the spirit of their old haunt had been preserved. Pinero was surprised by how much the space had changed. "It's a brand new venue," she said, but noted, "The vibe is the same, [and] the feeling." "It's crowded," she remarked, but added, "which is a good thing." "But with fun people," said Fearon. "Everyone's dancing in there. And that's major. Because so often you go to a place and people are just posing and boring." "Or being pretty," said Pinero.