Dozens of sea-warrior tribes gathered in Queens on Saturday for the eighth annual Battle for Mau Mau Island, an anarchic summertime extravaganza for DIY boat-builders and anyone else who loves collaborative art, chaotic weirdness, getting decked out in strange outfits, and day-drinking at sea.

“It’s a mixer for creative people who actually do shit,” said participant James Telfer. “There are no spectators at Mau Mau—you’re either part of it or you can’t come.”

To join the improvised "island," groups piloting a wide array of seacraft—from fully operational motor- and sailboats to all kinds of plywood-and-barrel pontoons to stitched-together inflatable fleets—converge at a meeting point in the Rockaways that varies from year to year (the organizers prefer not to specify the exact location, due to the event's requisite clandestine nature). At the appointed hour, everyone sails, rows, paddles, or gets themselves towed out to a central floating dock and ties in to form a huge amorphous flotilla.

Gangs have themes and costumes, raise a team flag, and bring big batches of a signature cocktails to share. There are some activities, including a day-long game of Capture the Flag, pugil fighting, and swimming races, but the "battle" is mostly a gleeful, madcap floating soirée, with more than 100 revelers leaping from boat to boat, sharing snacks and booze and sunscreen, and floating around making sure the boats don’t sink. "Such an incredible amount of passion goes into keeping these lovingly crafted vessels afloat,” said Hannah Frishberg. “When our posts broke after launching, one teammate straddled the boat while mostly submerged and drilled them back into place.” 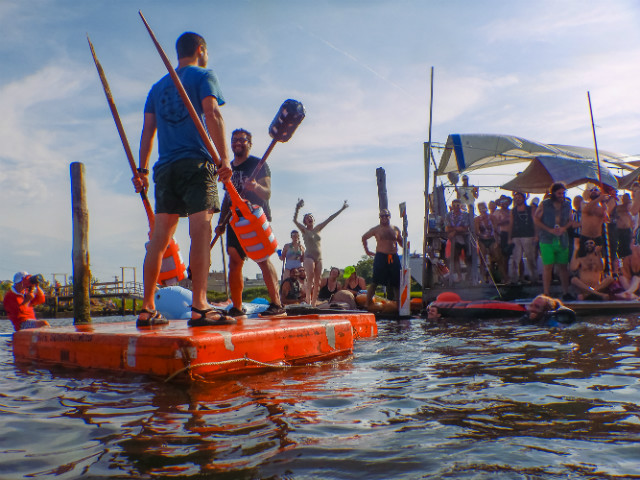 The Dragonflies sailed a multilevel boat constructed years ago in New Orleans; Monkey Business paddled a plywood-and-2x4 assemblage floating on industrial IBCs supporting a massive trampoline; and SpeakHard (“like a speakeasy, but more difficult,” its captain, Lindsay Arden, explained) glided through in a catamaran bearing a bar tricked out with vintage goblets, tiny disco balls, and an antique-looking candelabra.

Participants came dressed in tutus and sequins, handmade bikinis and silver-dyed life vests, with jaunty pirate hats and raccoon tails pinned to their thongs. One team had a hammock made of pool noodles and another towed a second boat with an enormous volcano atop it. Splashing through among all the larger craft were inflatable rosé bottles and a rainbow-horned narwhal, two-person paddleboats, tricked-out canoes and kayaks, and two different boats made from bathtubs. At one point a woman floated through, cross-legged on a boogie board, eating salad with her fingers from a bowl in her lap. At another, a man blew huge fireballs into the bright summer sky. Later, as the light faded with the sunset, someone started shooting fireworks into the gloaming.

There’s just not that much flagrant, joyful lawlessness left in New York City these days, but Mau Mau taps into that feeling perfectly. As Jeff Seal put it, “It's important to have crazy and chaotic events by and for artists. We can't let finance bros take over the entire city!” Monki Lola takes it a step further: “For NYC to keep its edge, we have to seek out and participate in unusual experiences that emphasize creativity and ingenuity, foster community, and encourage risk-taking. Mau Mau builds character—our own and our city’s.”

#good times
#mau mau island
#summer
Do you know the scoop? Comment below or Send us a Tip