All the world's a stage, and all the cats are merely models: On Thursday afternoon, the Algonquin Hotel's Annual Celebration & Cat Fashion Show took place, featuring fabulous felines decked out in outfits celebrating famous Broadway shows. Yes, that is the King of Siam from The King and I (though not a Siamese cat), and, indeed, there was a furry interpretation of a von Trapp child in lederhosen.

The beloved gathering of cats and the humans who love to dress them featured the first public appearance of the hotel's new Algonquin Cat, Hamlet, as retiring Algonquin Cat Matilda III was serenaded by the cast of Cats.

The event was a fundraiser for Mayor's Alliance for NYC's Animals. At initial count, organizers say that over $12,000 was brought in through tickets and the silent auction. Another nice statistic: Three cats were adopted through the event (an adoption van was stationed outside the hotel).

Photographer Sai Mokhtari captured the action for Gothamist and reports that the crowd was a "50-50 mix of cat enthusiasts and media (or at least 'people with cameras') who are elbowing each other to get a picture at the 'stage area.'" For what it's worth, Mokhtari confirmed that in spite of the intense media scrum, the cats were "uninterested at best." 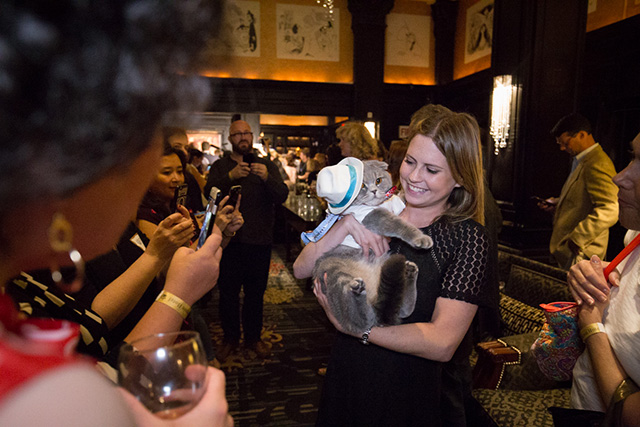