This weekend the Brooklyn Cyclones saluted Seinfeld at MCU Park Kramerica Industries Park, and they didn't stop at the Little Jerry bobblehead giveaway.

Steve Hytner, who played Kenny "That's Gold!" Bania was in attendance, there was soup from the Soup Nazi, puffy shirts, a Fusilli Jerry craft table, a Top of the Muffin to YOU contest, a Costanza trash eating competition, an Ovaltine Drinking Relay, an Urban Sombrero Catch, a These Pretzels Are Making Me Thirsty Challenge, and our favorite: the Elaine Dance Contest, with contestants donning their finest Elaine Benes apparel.

The team also wore these special jerseys, inspired by Kramer's Technicolor Dreamcoat. Sadly, however, Keith Hernandez did not join them. 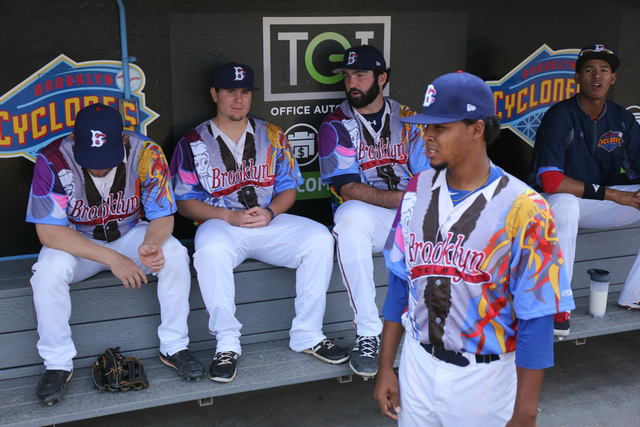 Still, the Cyclones won, 9-2 over Williamsport, thanks in part to Brandon Brosher, who "had a night that was real and spectacular as the 20-year-old slugger set a franchise record with seven RBI."

Next up, on July 11th, the Cyclones will host a Star Wars sleepover.