Jane's Carousel opened to the public at Brooklyn Bridge Park in September 2011, and it wasn't long until its future was threatened when the basement was flooded during Hurricane Sandy, damaging all of the machine's electronics. The carousel itself was undamaged, but with Future New York all but certainly doomed to sink, David and Jane Walentas are taking steps to delay the inevitable as long as possible.

David Walentas owns Two Trees Management Company and almost single-handedly developed DUMBO—he apparently has "NO GUTS, NO GLORY" embroidered on the cuff of all his dress shirts. "For our 40th anniversary," his wife told reporters gathered in front of her eponymous carousel this morning, "instead of diamonds, I got flood gates." That would be the AquaFence—simply put, a series of marine-grade panels connected together with rubber material.

The AquaFence at Jane's Carousel is made up of 4 ft. panels, 160 pounds each (which extend both vertically and horizontally) that use the weight of the water to press down onto the panels creating (and reinforcing) the seal. For a team of 6-10 people, the fence around the carousel can be put up in about 3 hours (around 3-5 minutes per panel)—the only tool required for set up is a common hand drill. The Director of Operations for AquaFence in New York, Adam Goldberg, explained that they "wanted to protect [the carousel] but didn't want to change it visually." Goldberg placed the value of the fence around $125,000. 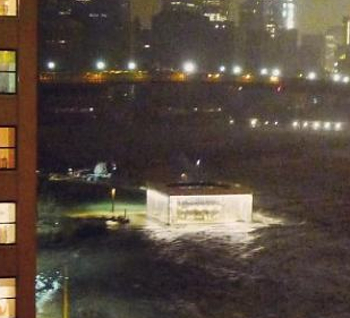 "The image of Jane's Carousel submerged during Hurricane Sandy will remain in our memories and is a testament to the importance of resilient design and preparedness in the face of climate change, " said Regina Myer, President of Brooklyn Bridge Park. Speaking of climate change, Goldberg has been in contact with a number of clients around the city—in Lower Manhattan, the West Village, and along the West Side Highway—regarding the AquaFence. SL Green, RFR Holdings, Pan AM Equities and even the Port Authority (for an undisclosed NYC airport) are all in conversation with AquaFence.

Goldberg also mentioned the possibility of putting a fence along the edge of Lower Manhattan and said that he has opened initial talks with some city officials. "What we are seeing when buildings go to refinance or renew insurance," Goldberg told the crowd, "[is that] they are being told to get flood protection."

#brooklyn bridge park
#flooding
#jane carousel
#original
Do you know the scoop? Comment below or Send us a Tip
A new Gothamist is coming! We’ve moved comments over to our beta site. Click here to join the conversation and get a preview of our new website.