Photos: Bronx Zoo To Open Zipline Across The Bronx River In July Visiting the Bronx Zoo will soon be more thrilling: The Wildlife Conservation Society will open two new attractions next month, one of which will give the public a chance to fly 400 feet across the Bronx River along a zipline suspended 50-feet above the water. Update: The attractions will open in July. Details below.

The zoo's plans were announced last December, and Sue Chin, the vice president of planning and design and chief architect at the WCS, said at the time, "It’s an amazing river in our city, but not everybody gets to see it."

The zipline is part of the Bronx Zoo's new Treetop Adventure attraction, which also includes an "aerial climbing experience" with seven ropes courses (two beginner; two intermediate; two advanced; and one expert) and obstacles like "rope bridges, wobbly bridges, tight rope walks, ladders, rolling and swinging elements," according to a press release. All participants will be harnessed in. 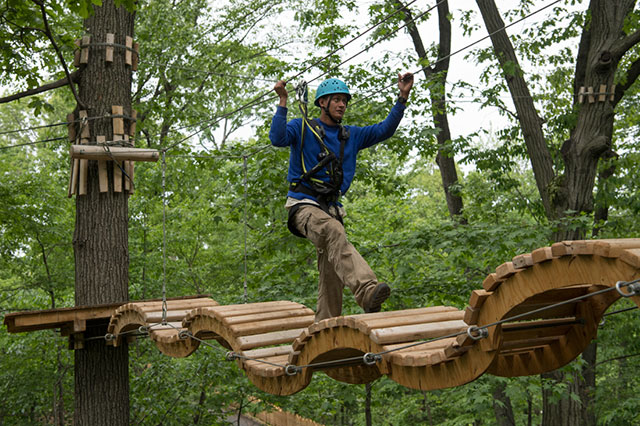 The Bronx Zoo Treetop Adventure, which is located next to the zoo's Bronx River entrance, will have a separate fee from regular zoo admission, even for members: A two-hour climbing ticket will cost $64.99, while a 2-way river crossing ticket is $34.99, or $74.99 for a climb & zipline combined ticket.

There's also a new Nature Trek attraction (included in the Bronx Zoo Total Experience, or $6 separately) which is a family-oriented adventure that has a completely netted climbing course with towers two stories above ground, connected by 12 different bridges (there's an ADA accessible route, too), and a "nature play" zone that lets children explore natural elements.

Rendering of the Nature Trek (Via Adventure Park Insider)

The Bronx Zoo Treetop Adventure will be open year-round (weather-permitting). Given all the climbing and ziplining elements, there are many requirements: participants must be age 7 or older, weigh a minimum 50 pounds/maximum 275 pounds, and be able to touch a height of 5'6" when standing with feet flat on the ground. Children 7-17 must also be accompanied by a parent of guardian, who are able to sign a liability waiver and safety orientation.

The Nature Trek debuts will be open daily April-October and weather-permitting in November-March.