After a couple of years in Industry City and Crown Heights, the Brooklyn Flea Winter Market is back at its former home in the glorious old Williamsburg Savings Bank Clocktower, located right near all the subways at and around Barclays Center. Large crowds showed up yesterday for opening day, and you should probably expect more of the same today and every weekend from now through the end of March.

There are three levels to the Winter Market, with most of the vendors, on the main floor. The space itself is fantastic, with its soaring vaulted ceiling, ornate marble work, arced windows and passageways, strange carvings, and elaborate mosaic work. There are several booths up in the Mezzanine as well, which is worth visiting no matter what for the views out over the balcony.

The more than 100 vendors cover all the usual BK Flea categories (quirky vintage finds, original pieces by local artisans), and include a new jewelry designer duo, JACK + G; Huntress Home, which sells lovely 1950s - 1970s kitchenware; and the wonderfully chaotic dAN's Parent's House, still peddling nostalgia better than anyone else in the game. 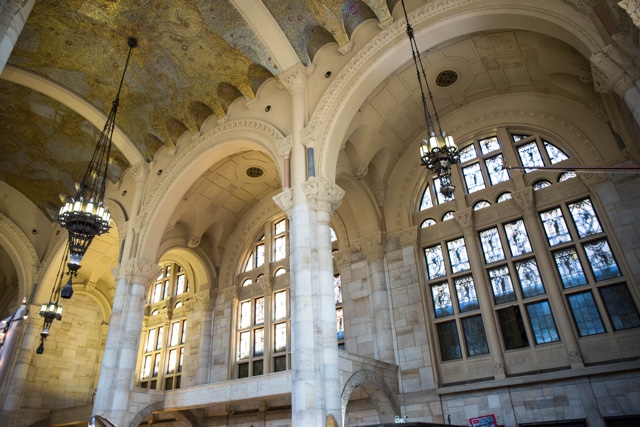 After all the browsing and shopping—or before, or instead of—head on down to the maze-like vault area in the basement, where 25 Smorgasburg food vendors can be found hawking food. Ramen Shack is back, which is excellent news, as is Ramen Burger, and the great Rubyzaar Baked has expanded beyond their line of crazy cookies to also offer grilled cheese sandwiches and some seriously delicious Frozen Cheescake pops.

The Brooklyn Flea Winter Market is located at Skylight One Hanson within the Williamsburg Savings Bank Clocktower, and is open weekends from 10:00 a.m. to 6:00 p.m. through March 27, with special holiday hours as well. There is a $1 admission fee for adults this year, some of which will be donated the Food Bank For New York City.

#brooklyn flea
#williamsburg savings bank clocktower
#winter market
#original
Do you know the scoop? Comment below or Send us a Tip