It was late August in 1776 that a scrappy regiment of 400 Maryland soldiers held off the British redcoats around Brooklyn's Vechte-Cortleyou House—reconstructed today as the Old Stone House in Park Slope—just long enough for George Washington to escape across the East River with his young Continental Army, some 8,000 soldiers as well as their attendant horses, supplies, and weaponry. Nearly half of those Maryland soldiers were killed in what become known as the Battle of Brooklyn, a resounding defeat for the colonies, but their determination allowed General Washington and his men to fight another day, and so, of course, win the war.

All last week the Old Stone House hosted a series of neighborhood walks and other activities to commemorate the 239th anniversary of the Battle of Brooklyn, culminating yesterday in an enthusiastic historical reenactment held at Green-Wood Cemetery, followed by a parade, led by the Merchant Marine Academy regimental marching band, to the top of Battle Hill.

About two dozen reenactors played their roles to the hilt out on Green-Wood's great front lawn, to the delight of several hundred spectators. Present at the proceedings were George and Martha Washington, British General William Howe, Maryland hero Lord Stirling, Ben Franklin (because why not, the guy was a rock star), as well as what appeared to be a Scottish regiment fighting with the redcoats and a reenactment group of black soldiers from Rhode Island, representing the many men of color who fought during the Revolutionary War. 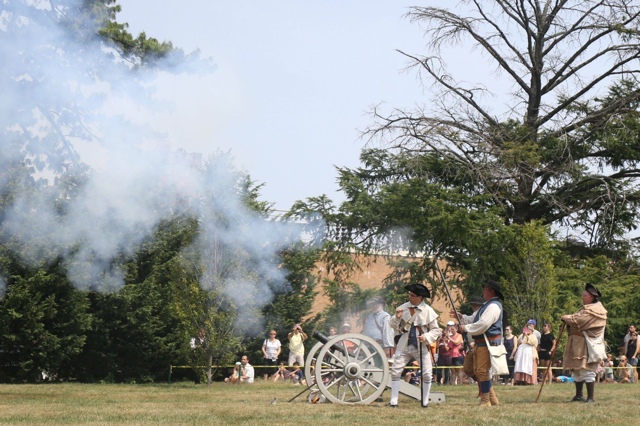 As in years past, the actual battle reenactment yesterday was pretty loose—muskets misfired, strategy and tactics are tough to convey, one British general fell off his horse—but it's loud as hell when that cannon is fired, and they whole thing gave everyone in the audience a chance to see how soldiers back then just basically marched slowly right into their enemy's musket balls.

Before and after the battle, all of the reenactors made themselves available to discuss their outfits, their weapons, and their role in history. Several women reenactors were on hand to support the soldiers, performing tasks such as crushing tea leaves, or cooking bacon by the fire. And, of course, given that it was a thousand degrees out yesterday with miserable humidity, and all these folks were wearing many layers of thick wool clothing, they were all heroes just for showing up.

#battle of brooklyn
#brooklyn
#green-wood cemetery
#revolutionary war
#original
Do you know the scoop? Comment below or Send us a Tip