The broken hearted balloon that Banksy placed on a Red Hook wall in early October has seen a lot of action since it debuted: it was tagged, covered with plexiglass, covered with a gate, guarded, and then ripped out from the building and flown to Miami, where it now sits. What was meant for the public, has been placed behind velvet ropes at Art Miami, one of the satellite art fairs that happens during Art Basel. Here it is on display today: 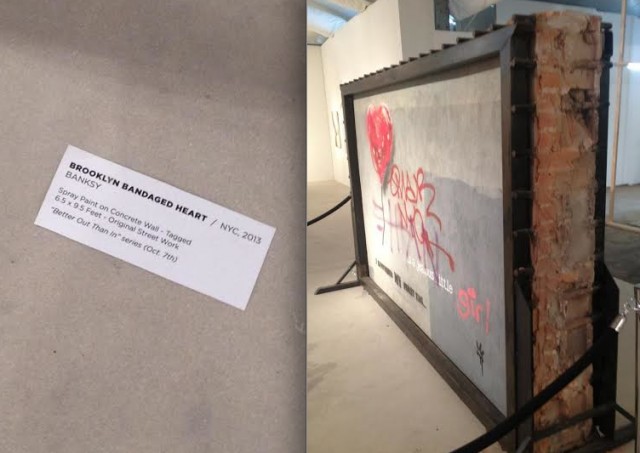 Somewhere, Banksy's WikiLeaks car is also on display and ready to hit the auction block down there. The man behind robbing New York of the pieces is gallery owner Stephan Keszler, and this isn't his first time working with building owners to procure Banksy pieces for profit. Pest Control, who works with Banksy, has previously “warned Mr. Keszler about the serious implications of selling unauthenticated works," and they won't authenticate the works, "claiming that the artist wants these stencil paintings to remain in their original context." Though as ArtNet pointed out, "Authenticating his Street Art, Banksy said in an interview, would be like 'a signed confession on letterhead.'"

Either way, Keszler will probably walk away with a million bucks.

#auction
#banksy
#miami
#red hook wall
#velvet ropes
Do you know the scoop? Comment below or Send us a Tip