Chilean street artist Nelson Rivas, aka Cekis, is finished with his massive new mural under the BQE overpass at Atlantic Avenue. The piece, entitled "Into the Wild, Brooklyn," is a tangle of bright metal beams and organic plant life—a mix of the city's man-made and untamed features. Covering the entire southern wall of the overpass, Cekis's mural emulates the pier structure of the nearby Brooklyn Bridge Park. "Those metal beams are like a skeleton. In between them there's a lot of other things that I use in my paintings, like chain link fences. I use fences to create my overall compositions. They're never a primary subject, but more of a texture," the artist told Gothamist last month, as he was tracing his first few lines.

"I noticed at first, when people passed by and saw the white wall with the drawing, they didn't understand anything and they kept going. But then, after days and weeks of work with the colors, it's been quite awesome to see how attitudes toward the wall changed in a very positive way," Cekis said of the piece Friday. 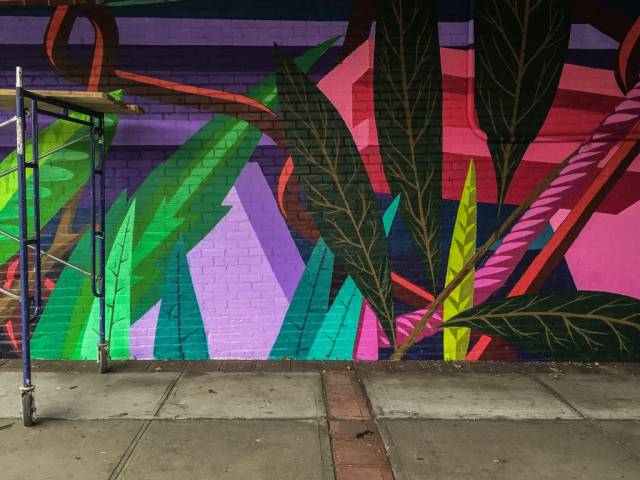 The mural was commissioned by the Atlantic Avenue Business Improvement District, the Department of Transportation, and Brooklyn Bridge Park, as part of the DOT's Arterventions program to liven up areas near the borough's waterfront. "We often hear New York described as an urban jungle. What Nelson Rivas has done is capture some of that 'wildness' while creating a little oasis under the BQE," AABID Executive Director Josef Szende said.

Cekis, a Santiago native, has been making street art on a mostly-legal basis for 25 years and has called New York City home since 2004. His murals can be seen in Bushwick, Washington Heights, Sunset Park, and, now, a little space beneath the BQE.

#Cekis
#mural
#street art
#original
Do you know the scoop? Comment below or Send us a Tip