This was it, the big time. I had dragged my mother's Chinese vase from my apartment (where it's been sitting under a desk because tabletop vases and toddlers don't mix), wrapped it in a blanket and placed in a granny cart and hauled it to the Javits Center, where the Antiques Roadshow was welcoming 5,000 folks lucky enough to score tickets to bring in two items for appraisal. And after 24 years, I'd finally know if this vase was actually worth anything at all... or just a waste of space.

This past Saturday, Antiques Roadshow, the popular PBS show produced by the Boston public television powerhouse WGBH, made its first visit to NYC since 2001. The Big Apple stop was part of its filming tour, which included Chattanooga and Chicago, for its 19th season, which will air next year. The show's setup at the convention center was very simple: After attendees go through "triage" and receive tickets to where their items can be appraised (I got an Asian Arts ticket), they head deeper into the one of the halls, where they wait on lines for their respective categories. 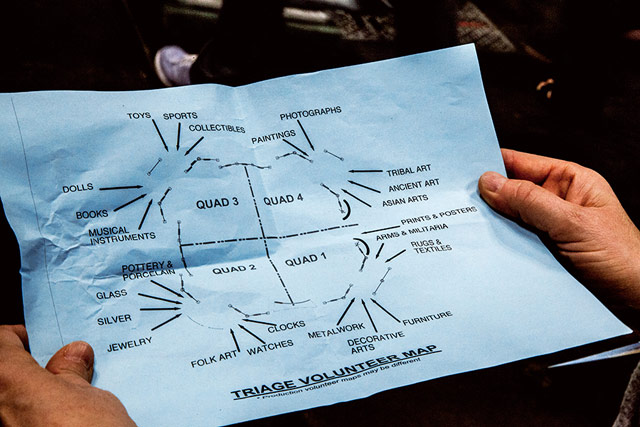 The layout of the appraisal areas (Amy Finkel/Gothamist)

When you're close to the head of the line, you go into the heart of the Antiques Roadshow: Dozens of appraisers sitting at tables in a rough circle, and in the center of the circle, four areas where appraisals are filmed for possible inclusion in the shows. I was lucky enough to see one extraordinary appraisal—a woman brought a collection of 1871 professional baseball player cards, members of the Boston Red Stockings, and some letters. While the cards were in pristine condition, the letters were fantastic. It turned out her great-great-grandmother ran a boarding house in Boston and housed the players. During one trip to Washington D.C., they wrote her a letter (each player contributed a line) with some players telling her how they missed her cooking. 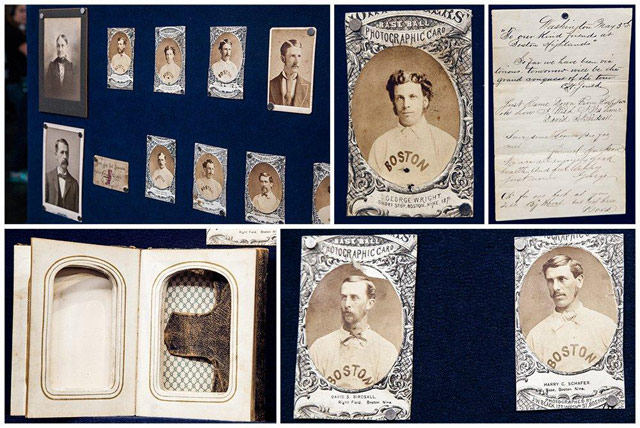 The woman (her name is kept anonymous for security purposes) told us that she was once offered $5,000 for it 30 years ago and guessed that it was worth maybe $10,000-20,000. However, appraiser Leila Dunbar told us that once she saw it, she knew it was special. After consulting with her colleagues, she put an insurance value of the collection, including the letters that prove their authenticity, at $1 million. Dunbar said it was a "fabulous way to start the day" in New York. Antiques Roadshow producer Marsha Bemko later revealed it was the most valuable sports memorabilia ever appraised on the program.

The million-dollar appraisal is rare, but it's certainly the dream for some attendees. Former NY Assemblyman Richard Brodsky rented a Penske van to transport a huge WPA oil cartoon from his Sleepy Hollow home (his wife said it's been in their basement because they don't have any walls big enough to display it) and joked it'd be valued at "three million dollars!" He also brought a hanging chad voting machine from the 2000 election. Brodsky said, "I was part of a group of lawyers counting votes for Al Gore," and when the machine hit eBay, he had to buy it.

Other Antiques Roadshow fans just want to learn more about their beloved objects. Michael, from Harlem, brought in a late friend's huge portfolio of photographs taken during the early 1900s. His friend had been an architecture student at Columbia University in 1917, and there were photographs of turn-of-the-20th century New York and Washinton D.C., as well as ones of foreign cities. 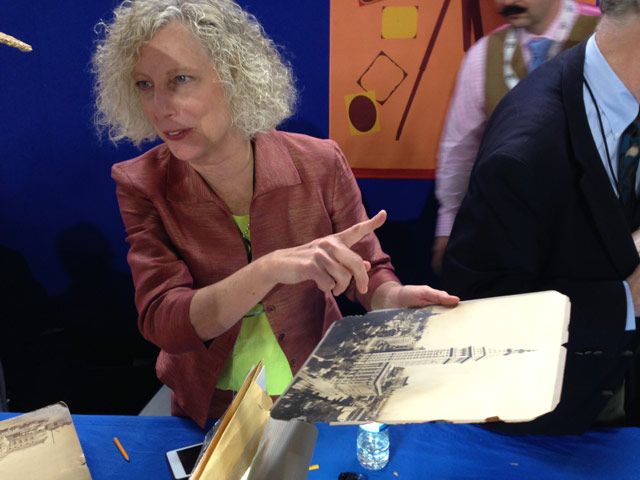 Appraiser Daile Kaplan was particularly tickled by a photograph of Madison Square Park, because her office, at the Swann Auction Galleries, is right around the corner on East 24th Street. She showed the photograph to her fellow Swann appraisers, including Swann president and possibly the most dapper appraiser, Nicholas Lowry.

Kaplan explained that many architecture students used photographs from other cities to help them see how structures and buildings were constructed, like the tourist photos of the Sphinx and pyramids. (The photographs' value varied because some of the photographs were very worn.)

For Jim, of Morris County, NJ, a pair of five-figure estimates for his Beatles memorabilia were frustrating. A huge Beatles fan (he refused to state what his favorite song was, "because they're all great"), Jim found some handwritten, unfinished George Harrison lyrics for sale in Austria and bought them for $4,900. Appraiser Philip Weiss put a value of $8,000-10,000 for it, but Jim was convinced it was worth much more. Then, his 1963 "New Big Beat" Beatles magazine cover was appraised at $15,000, because of the four Beatles' autographs, leading Jim to say, "I think it's just worth $10,000," based on his conversations with different Beatles authenticators.

The Arms and Militaria table was quiet when I stopped by around 11:30 a.m. I asked if NY's gun laws dampened enthusiasm for bringing in firearms, and appraiser Rafael Eledge conceded that some gun owners might find it to be more trouble than it's worth. He and his fellow appraisers had only seen half a dozen guns, while in other cities, they'd see a hundred by now. "Most people don't understand the law," he told me. The NYPD was stationed at the entrance, and Eledge said the police are there at every roadshow city, adding, "They are great and they keep us safe and take care of us." 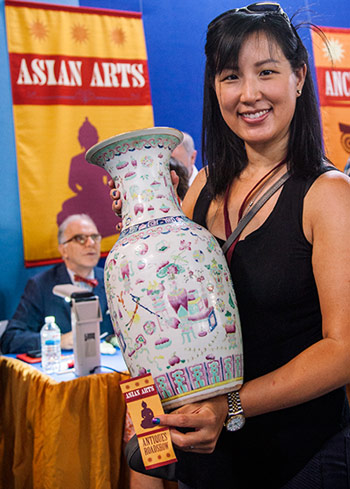 As for my vase, Asian art expert Lark Mason asked me what I knew about it. "My parents got as a housewarming gift, in 1990, when they moved to a new place in NJ," I said, and took out a document. "There's piece of paper says it's 100 years old, but I have no idea if it's true or not."

Mason looked it over, noting that the paper was dated in 1990, so it could be from 1890, Actually, surprisingly, that's true. It's from the Guanxu period" of the Qing Dynasty. "It's what's called famille-rose, which references this rose pink color which was first used in Chinese ceramics in the early 18th century and then was very popular after that," Mason said.

Pointing to the illustrations on the vase, Mason explained, "It's referencing these early 18th century designs, but this is an updated version of that... Incorporated in the designs are various symbols that have connotations of good luck. So you have a lot of symbolism here which would indicate this was made for some sort of presentation piece, for a marriage or a birthday... or moving to a new house."

Turning the vase over, he continued, "There's no mark underneath, so we know it's not from one of the kilns sanctioned by the Imperial government for making things for the Imperial household. So this was made for ordinary people... It's nice quality, it's made of porcelain. I love how there are peaches and the key fret design." After asking if I had a pair of these vases (no, just one), Mason said, "At auction, this vase would go for $700 to $1000."

Wow. I should probably wrap it in a bubble wrap while it's under the desk.