In the late 1980s, as 97 Orchard Street was being turned into the Tenement Museum, this overdue slip from Seward Park Library was discovered in one of the mailboxes. The piece of mail was addressed to Louise Sylvia Katz, who had lived at that address in the 1920s. The Tenement Museum currently has the item (from 1928) on display at their Sweatshop Workers Tour, but when they sent us these photos this week they told us the title of the book is "one of the great mysteries, we unfortunately do not know." Indeed, the title, written in cursive, is hard to decipher:

We turned to Twitter and immediately a few people solved the mystery, including the NYPL:

The book, which may have NEVER been returned, was Israel by Ludwig Lewisohn (published in 1925). From Amazon: "In his interpretation of Jewish life, Lewisohn talks about Jews in the U.S., in Europe, and in Palestine, and about the origin and development of Zionism." 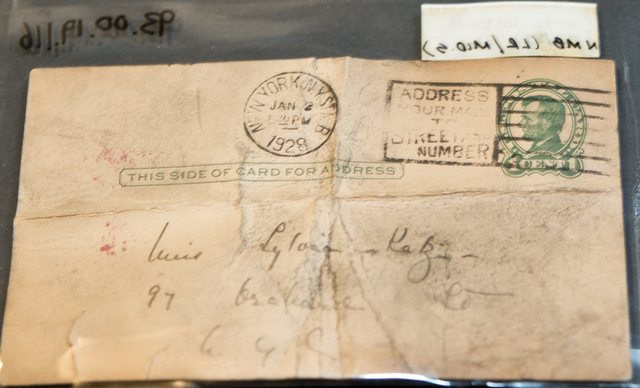 You can see this slip, and perhaps help solve other tiny mysteries, at the Tenement Museum.

#book
#history
#late fee
#mystery
#overdue
#tenement museum
#original
Do you know the scoop? Comment below or Send us a Tip