Photos: An Illicit Goodbye Party For An Abandoned LIRR Train The classic commuter train, with its red- and blue-seated insides, early 2000s advertisements and so very much dust, is in such disrepair it will need to be carried on a flatbed truck to meet its destiny in a Midwestern scrapyard. In a send-off ceremony of sorts, before the rail car leaves the boroughs, locals descended upon it to gawk at the glory of disused public transit innards and, for one last night, to fill the abandoned train with New Yorkers.

Up an overpass, across a plank and along the creek by way of a yellow honeycombed, plastic footbridge, a member of the urban explorer group LTV Squad and I led partygoers to the train on its isolated tracks. Heads quickly disappeared into the expanse of steel, only to reemerge hours later with its parts: an odometer, a brake pull, emergency exit instructions. One car was littered with yellowed blueprints; a 2009 Newsday found in another was held out a window and set on fire. 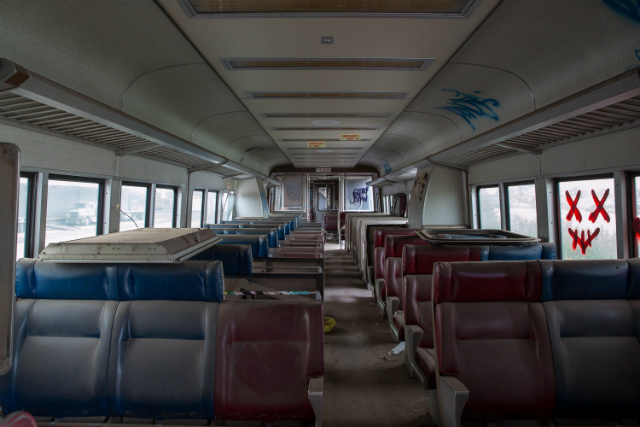 We got a grill going and strangers inexplicably appeared with steaks and Italian sausages to add to our feast of 10-pack hot dogs. A stage was assembled from the plastic caps of run-around hoses and ripped up seats for Nicholas John, who strummed and sang as his audience sat on top of the train behind him, kicking their feet in the windless night. In time, his harmonica ended up on the roof, in the hands of an audience member, who played on as others nimbly wandered, jumping between cars.

A raccoon bolted across the yard. An LED billboard blared in the near distance. I'm told, at some point in the night, a seance was held inside the train. Eventually, everyone realized the lateness of the hour and drifted back into the darkness, out towards (somewhat) better functioning MTA properties to carry them home, leaving the LIRR train alone again, tagged to hell at the end of its line.

Hannah Frishberg is a fourth-generation Brooklynite and freelance reporter. She was previously the Editor in Chief of Brokelyn. Her work has appeared in the New York Post, CityLab, the Columbia Journalism Review and elsewhere. Follow her on Twitter: @hfrishberg

#lirr
#parties
#original
Do you know the scoop? Comment below or Send us a Tip