On Tuesday morning, the artist stood in the southeast corner of Central Park, fielding reporters' questions about the forthcoming pieces, all of which relate to the global migration crisis. Behind him was the Gilded Cage, an enormous, free-standing enclosure with an open roof and inaccessible egg-slicer turnstiles. It's one of the exhibition's three large-scale centerpieces, along with a mesh-and-metal installation adjacent to the Unisphere in Flushing Meadows Corona Park, and the large fence under the Washington Square Park arch (a NIMBY target for months, because it will displace the Christmas tree).

Over the noise of Fifth Avenue traffic, Weiwei spoke about his love of New York City, his use of security fences as a motif, and President Donald Trump, whose tower and former headquarters loomed over the Gilded Cage. "I made the sculpture gold to make it more friendly to Trump," he joked. 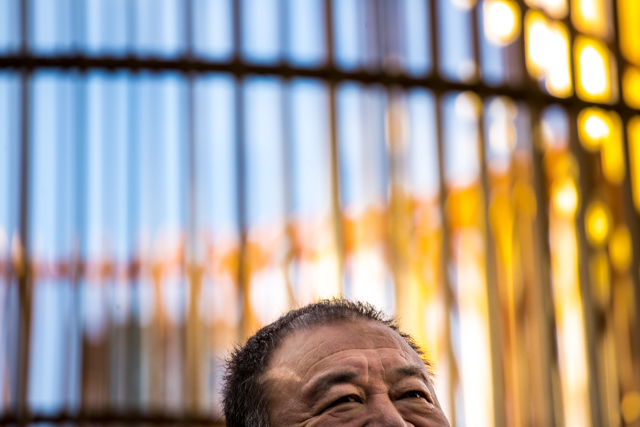 "Fences and territory have become a more urgent topic in everyone's conscious—especially the U.S," he said. "We are living in a time of no tolerance...It's completely going backward, against freedom, against humanity, against our understanding of our time. So that's why I made a work in relation to this issue."

In addition to the citywide exhibition, Weiwei's new documentary Human Flow, about the world's 65 million refugees, opens on Thursday. That film, which he considers "one project" in tandem with the exhibition, brought him to 23 different countries and and over 40 refugee camps.

His takeaway, he said Tuesday, was that "Major nations should bear much more responsibility for the refugee crisis," particularly the United States and Britain.

While critical of the U.S. and its Queens-born president, Ai repeatedly expressed his admiration for the people of New York. Describing the decade he spent in the Lower East Side, beginning in 1982, Ai said that he "never felt like a foreigner. Nobody questions you in this city. Everybody has their own integrity." He recalled selling T-shirts as a young artist in Flushing Corona Park, where his Circle Fence installation will soon stand.

Since then, Weiwei has become a preeminent artist in several different forms of media and a leading voice of human rights advocacy. Between 2011 and 2015, he was held as a political prisoner in China for his criticism of the Chinese government. During that time, he was named the most powerful artist in the world by ArtReview, and China's most dangerous man by Smithsonian.

Despite the accolades and experience, Ai says he's been nervous about the citywide art exhibition since he was first approached, years ago, by the Public Art Fund.

"It's not easy for me to put a simple sculpture in New York City," he said. "I have to do something to pay back my respect, my love for New York."