At around 10 p.m. on Saturday night, the racket from the pillow fight I was officiating in the back of a U-Haul was interrupted by a commotion on the street. I peeked around the truck to see a huge metal horse “galloping” by — well, being rolled along on clattering wheels by a half-dozen wildly dressed people. Astride the silver steed was a raven-haired woman in leather and lace, whooping with delight. As the group turned a corner, heading for a matte black van covered in stones with light projections flowing off the roof, I realized that one of my pillow fighters had picked up an air mattress and was clobbering his opponent with it. I counted down the end of the match, the assembled onlookers cheered, and the players exited, feathers in their hair and feral grins on their faces.

This is the Lost Horizon Night Market, an itinerant carnival made of interactive art installations in the backs of box trucks that has been popping up in New York City since 2009. At a moment when the world seems to be going in a bleaker, more dangerous direction than at any point in our lifetimes, this is a night where New York’s most unusual spectacle-makers gather to share a few hours of pure weirdness and joy.

The Night Market is a shadowy affair, a truly underground, immersive occasion at a time when both those words have been so overused as to be rendered nearly meaningless. There is no mailing list to sign up for or Facebook page to “like”; one only learns of the sporadic soirée through word of mouth, and the market’s location, different each time, is not revealed until the day of. The only instruction truck proprietors receive is to create an interactive art piece within the vehicle’s four walls.

“There is something intoxicating about creating a one-of-a-kind experience that exists in a specific time and place and never again,” says Andy Wallace, one of the creators of the Death By Audio Arcade truck. “This kind of seek-and-be-rewarded art is part of what pulled me into the warehouse scene in the late 2000s and I find it as invigorating as ever.” 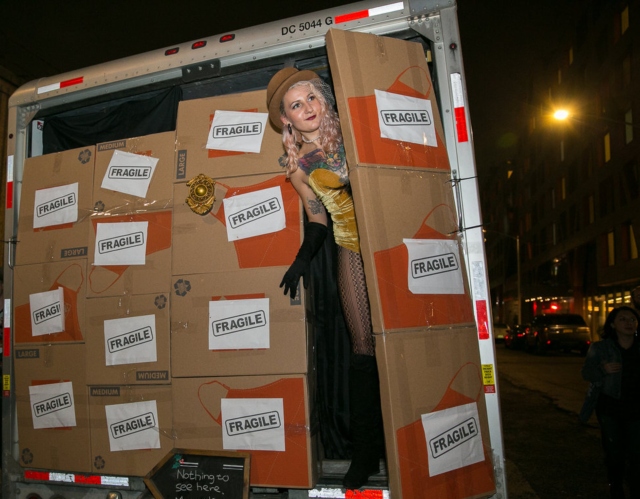 Saturday’s market, situated on two dimly lit blocks in industrial Bushwick, included 19 trucks, ranging from very simple to hilariously convoluted concepts. Each engendered its own atmosphere, engulfing visitors in a tiny world that was consuming enough to let people forget about the real one for a little while.

“Shadow Land” was a dense, enchanting forest of moss, foliage, and brambles. Participants were given earthy aphrodisiac tea, then crawled through to a dimly lit lounge and played paired “intimacy games,” like listening silently to each other’s heartbeats or trying to communicate only by touch. “The Truth About Your Friend the Raccoon” gave guests a crash course in the art of the masked bandit, with a series of silly games that had to be played while wearing tiny raccoon paws. In “Maybe,” attendees donned blindfolds and were fed an assortment of foods, encouraged to consider them by texture, emotion, sound—anything other than taste. At “Glitter Shoot-Off,” pairs fought duels with glitter guns that were rigged so that only the first trigger pulled would shoot, so it was clear who won when the sparkly loser slunk out.

“This is an event that inspires people to jump in and play along, to ask questions, to say yes,” says Ereka Duncan, one of the proprietresses of “Shadow Land.” “Everyone’s entire life is a spectator sport these days. We need to get people inspired and moved to do something.”

The Hobo Roadshow brought their mysterious musical wooden caravan, which offered “nitrous theater” to audiences of one. In order to enter the “Fragile Spirits Emporium,” guests had to share a childhood secret, a life dream, or a deep vulnerability, then they were mixed a custom drink in a comfy speakeasy. “Mystery Grilled Cheese” plied attendees with warm sandwiches and encouraged them to guess the unusual ingredients. The goings-on within “Hot Lettuce” remain top secret, but the proprietors, dressed in bright green from head to toe, tantalized those waiting in line by feeding them bits of lettuce warmed on Sterno candles.

“The Night Market is an affordable way to create a performance or installation,” says Eleanor Lovinsky, who worked with “Hot Lettuce” and has been creating trucks since the very first Night Market. “For attendees, it was a free night, and the streets were filled with interesting people—people who want to do something a little unusual on a Saturday night.”

Some truck proprietors traveled from other states to participate. “Blood Bond,” by Philly performance troupe Spektra Pulse, offered a one-on-one “horror experience” that guests had to sign a waiver to participate in. Another group from Philly created “The Many Faces Of…,” in which participants climbed into a gigantic mouth to find themselves in a dark lair having a cultural exchange with a synthesized Sewer Monster. Up from New Orleans, James Joy Ryan brought his “Anything Machine,” a visual and aural cacophony that had to be entered through the door of a washing machine.

Amid all the “formal” trucks were roving experiences like chakra-alignments, rhinestone makeovers, subconsciousness sculpting, and a comfy cuddle pile in the back of a pickup. Wherever you went, something beautiful and bizarre was happening. Everything was free, and nothing was officially sanctioned or designed; everyone just climbed up into one new experience after another, for as long as they wanted. At midnight, proprietors rolled down their gates and drove away, and it was like the Night Market had never been there at all.

“Capitalism is crumbling,” says Rohan Thadani, proprietor of the screenprinting truck. “It’s imperative that we create a community of people who think differently, and [events like this] keep the renegade counterculture spirit that makes NYC interesting alive.”

#brooklyn
#bushwick
#Lost Horizon Night Market
#original
Do you know the scoop? Comment below or Send us a Tip