Photos: A Brooklyn Navy Yard Cemetery Has Become A Park Brooklyn's newest public park rests four feet above what was once a burial ground—not so uncommon, as plenty of our city's parks were formerly potter's fields. The Naval Cemetery Landscape sits at the Southeast edge of the Navy Yard and is comprised of wide, gently-curving platforms that allow you to walk around 1.7 acres of overgrown, grassy space along the border of Wallabout Bay. For nearly 80 years, that space functioned as the cemetery for the Brooklyn Naval Hospital; according to the Brooklyn Greenway Initiative roughly 2,000 people were buried there between 1831 and 1910.

And what's it like to wander around the new Cemetery Landscape? In a word, nice. The park's paths travel far enough from busy traffic on the adjacent Williamsburg Street that it's possible to feel cut off from the more intense aspects of the city. Tall grasses and specially-planted wildflowers have grown high enough to stand level with the platforms, and trees offer shade around most of the outer edges. Small amphitheater-style risers sit in one corner, which means indie theater productions and unplugged concerts are only a matter of time.

A trail of large stone platforms (weirdly reminiscent of gravestones) intersect one of the paths, and visitors are encouraged to walk on them. Out there on one of those little rocky islands, things feel even more nature-ful. You can reach out and touch the grass! Neat! 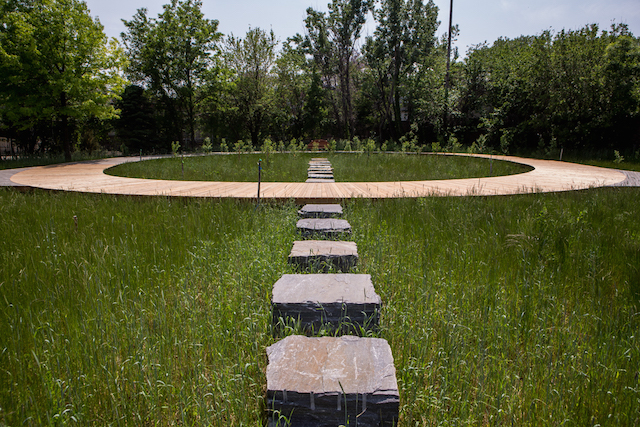 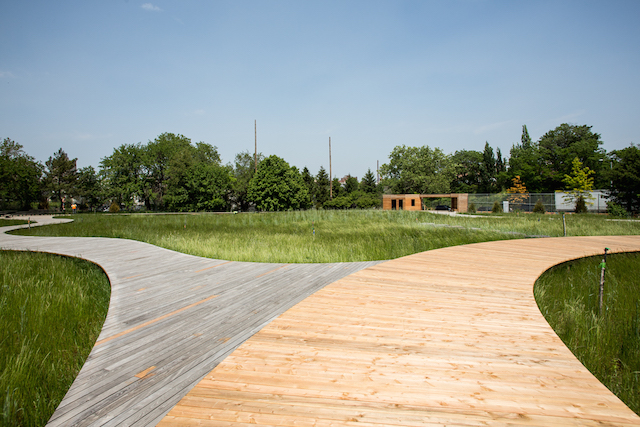 According to the Brooklyn Greenway Initiative, during the 1990s, archaeological work on the park's ground found that the remains of 987 people were relocated from the cemetery to other sites, including Cypress Hills National Cemetery. Still, that number means that the remains up to 1,000 U.S. Navy and Marine servicemen are likely still buried beneath the Landscape.

The park opened to the public late last week, and while daytime attendance is still low, Brooklyn residents are beginning to enjoy the convenience of open public space along the Navy Yard waterfront. "I've been watching it being built since last year," Isaac Fay, 30, said. Fay had stopped at the park Wednesday afternoon to cool down after a run and admitted he was impressed. "It's great. I'm happy to see what's been a weed field for so long become a place to hang out."

Another visitor, Nathan Koenig, took advantage of one of the park's less-obvious features: a small leather-bound notebook tucked under a wooden bench, meant for visitors to leave drawings and short personal musings. "I like it," Koenig said. "It's a lot different from other New York Parks."

#brooklyn navy yard
#Cemetery Park
#Naval Cemetery Landscape
#navy yard
#parks
#original
Do you know the scoop? Comment below or Send us a Tip
A new Gothamist is coming! We’ve moved comments over to our beta site. Click here to join the conversation and get a preview of our new website.