Photos: 75 Emerging Artists Take Over The Whitney For 2019 Biennial The Whitney Biennial, the museum's biannual "frontline report" on what's happening in American art right now, opens its doors to members today (May 14th) and to the general public this weekend. It's the 79th iteration of this eagerly anticipated, often controversial, and recently protested exhibition. This year it features the work of 75 different artists and collectives working across the country.

For the 2019 Biennial, in-house Whitney curators Jane Panetta and Rujeko Hockley focused on emerging artists, the vast majority of whom have never shown their work in this forum, and most of whom are under the age of 40. You'll find paintings, photography, sculpture, installation, mixed media, video, sound, and live performance, spread out over four floors and on the outdoor roof decks—it all feels very fresh and energizing.

As always with large, broad exhibitions of this sort, your reactions to individual pieces will likely vary widely as you wander through the galleries, but a few personal highlights from Monday's press preview would include Calvin Marcus's series of simple, bold paintings facing the elevators on six; Alexander Bell's heavily redacted Daily News covers and articles from their sensational coverage of the Central Park Five case and the non-existent "wilding" epidemic of the late 1980s; and Laura Ortman's haunting video of her playing violin in a lush mountainscape. 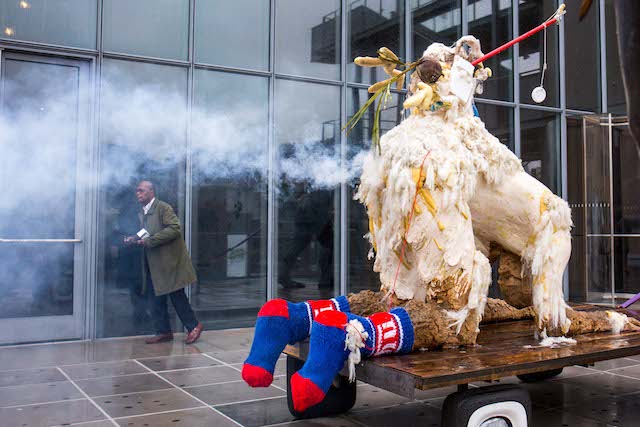 Both of the big sculptural installations in the outdoor terraces are show stoppers. Nicole Eisenman's crazy parade on the Whitney's sixth floor deck is amusing and grotesque in about equal measures, and rewards close inspection to notice all the bizarre detailing. And if it hadn't been raining I would have spent a lot more time with Meriem Bennani's playful, beautifully designed "Mission Teens: French School in Morocco," a multi-disciplinary "video viewing garden" outside on the fifth floor that, among its other delights, features a pretty solid rap song by Lil Patty.

Other good things: the performance by Brendan Fernandes's dancers (basically striking ballet poses in what looks like spindly jungle gym); a trio of weighty sculptures by Simone Leigh; Curran Hatleberg's journalistic photographs of the third floor; Keegan Monaghan's painting of a furry red phone; the portraits of bodies being altered by Elle Pérez; Heji Shin's photos of babies emerging from their mother; Kyle Thurman's brightly colored drawings, hung unusually low on the wall; and Agustina Woodgate's "National Times," a room full of clocks designed to erase their faces as the exhibition goes on.

For months now, activists have been mounting demonstrations against of Whitney Museum board member Warren Kanders, who has ties to a defense manufacturer whose tear gas canisters have been used against asylum seekers at the United States-Mexico border. Expect more protests this week.

The Whitney Biennial opens today for members, Friday for the general public, and runs through September 22nd.

#the whitney
#whitney biennial
#whitney museum
Do you know the scoop? Comment below or Send us a Tip