Tens of thousands of protesters flooded Fifth Avenue yesterday for the 27th annual Dyke March, taking over most or all of the street from Bryant Park to Washington Square. First organized in 1991 as an event for lesbians to express themselves apart from the gay men who dominated Pride, the march continues to be protective of its space and its constituency, though anyone who self-identifies as a dyke, regardless of “gender expression or identity, sex assigned at birth, [or] sexual orientation," is welcome to join. Allies and others were asked to watch and cheer from the sidewalk.

The demand for change was directed at a host of issues at this year's march, both specific and systematic: trans rights, racism, the patriarchy, capitalism, women's rights, health care, ICE, immigrant rights and Trump's concentration camps, police violence, mass incarceration, and fascism, to name a few. But Dyke March is also very much a celebration of being out and proud, and four marching bands helped keep the party lively all along the nearly two-mile route. Several groups, including the Church Ladies For Choice belting out their classic, "God is a Lesbian," were also stationed on the sidelines at strategic points along the way. 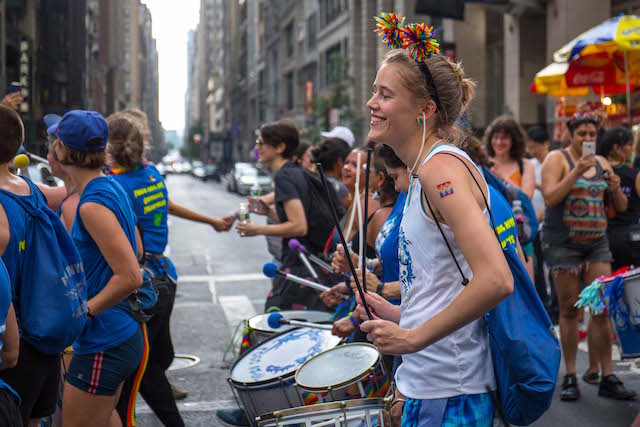 The NYPD set up barricades for the event, and provided a modest, unrequested escort, but Dyke March has never had an official permit, and in fact supplies its own security via a corps of volunteers who protect the marchers at every cross street along the way. Given Saturday's weather, a muggy low-90s, the traditional "swim" in the Washington Square Park fountain at the end of the march was an especially popular activity this year.

#pride
#dyke march
#nyc pride
#pride nyc
#pride weekend
Do you know the scoop? Comment below or Send us a Tip