Before the Reclaim Pride Coalition, there was Drag March. In 1994, the organizers of the Pride March were planning their big 25th Anniversary celebration and, not wanting to scare off potential sponsors, told the contingents of leathermen and drag queens that they wouldn’t be allowed to participate in the festivities. The late Gilbert Baker (who designed the now-ubiquitous rainbow flag), Brian Griffin (a.k.a. Harmonie Moore Must Die), and the Sisters of Perpetual Indulgence all decided fuck that nonsense and organized Drag March, where all are welcome. It remains unsanctioned and un-permitted to this day.

And so on Friday night, the 25th Annual Drag March stepped off from Tompkins Square Park a little after 8 p.m., and the glorious spectacle flowed all the way to the Stonewall Inn, dazzling motorists along the way...

Once at Stonewall, however, the event somewhat awkwardly converged with the official Stonewall 50 Commemoration, which was entering its fourth hour of speeches and taking over the entire block.

Let’s back up a bit. The Stonewall 50 Commemoration was the kickoff event of NYC’s World Pride weekend, with politicians (including presidential candidates Kirsten Gillibrand and Bill de Blasio), activists (including several of the original rioters from fifty years ago), and celebrities (Lady Gaga) all taking the stage near Waverly Place. It was scheduled to end at 9 p.m., in plenty of time for the Drag Marchers to arrive and end the night in the traditional way, with an emotional, full-throated rendition of "Somewhere Over the Rainbow." It still happened, but the queens had to compete with the speakers. 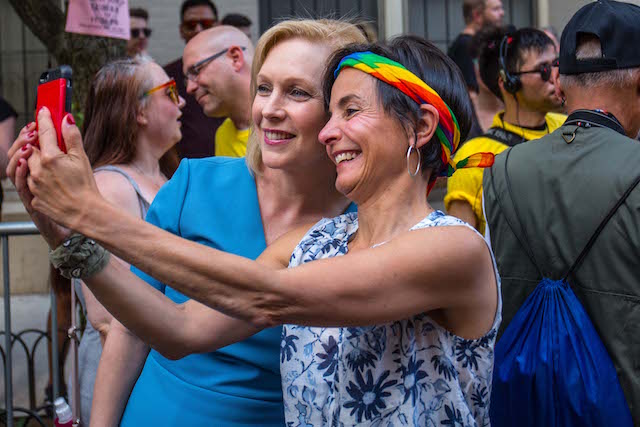 The march itself was bigger this year than anyone could recall, packing the street for at least two full avenue blocks. It was sexy, provocative, and rowdy, with a small marching band as well as several portable speakers scattered throughout, blasting disco anthems. As always, there was a strong protest component to the party, with chants like "Black Trans Lives Matter" and "We did it before we’ll do it again: Riot! Riot! Riot!" taking their place among cheeky Drag March classics like "We're here, we're queer, we're coming for your children."

Here's our guide to the rest of the marches going on in NYC for Pride weekend.

#pride
#drag march
#pride nyc
#stonewall
#stonewall 50
Do you know the scoop? Comment below or Send us a Tip