Oscar López Rivera, former leader of a Puerto Rican separatist group behind a series of bombings, may have been stripped of his official honoree title at Sunday's 60th Puerto Rican Day Parade, but his presence on the lead float, as a "humble Puerto Rican and grandfather," nevertheless came to define the mood for much the day.

The normally boisterous celebration of the culture and heritage is usually one the city's biggest parties—it attracts over a million spectators—but this year it went on without participation from the NYPD and FDNY, which refused to march even after López Rivera rescinded his title, as did several politicians, most notably Governor Andrew Cuomo.

More damaging to the overall party spirit: most the parade's big corporate sponsors also pulled out, including Univision, Coca-Cola, the Yankees, and Goya Foods, taking their music-blasting, freebie-tossing floats with them. 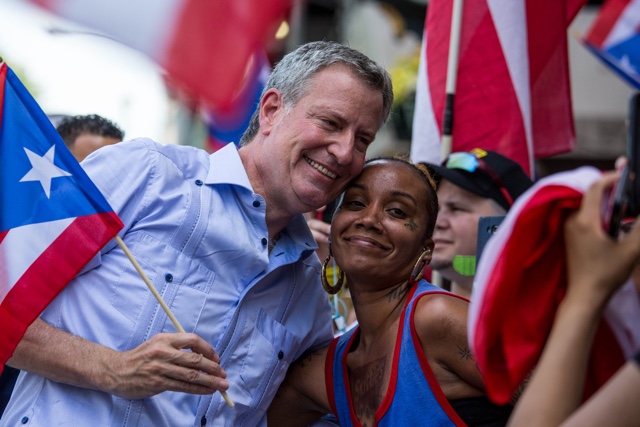 The crowds of spectators were noticeably thin over long stretches of the route as well, though the low-90s heat and massive police presence (with its attendant maze of barricades and viewing pens) possibly affected turnout more than the López Rivera controversy. Still, there was plenty of fun to be had along the way, and the many pro-López Rivera, anti-colonial groups who dominated the entire first hour of the parade were greeted mostly with cheers from the sidelines.

Politicians in attendance included the City Council Speaker Melissa Mark-Viverito, a long-time López Rivera supporter who rode by his side on the float for several blocks; and Mayor Bill de Blasio, who distanced himself from the front of the parade but waved his flag and happily shook hands, high-fived, and posed for pictures with the spectators whenever possible. Gale Brewer, Scott Stringer, and Letitia James were also spotted having a good time.