This weekend Storm King Art Center unveiled their new artworks for the season, Mark Dion's "Follies" serving as the highlight of the year, along with a new piece for their "Outlooks" series from Jean Shin. You'll now find the pieces throughout the institution's sprawling 500 acre space.

For this exhibit, Dion brought 13 of his architectural follies—constructed between 1994 and 2019—to the property. Visitors can experience these by peering through windows and, in some cases, entering the structures and interacting with what he's created inside. The pieces are "compact, decorative structures intended to inspire meaning rather than serve a functional purpose."

Since the mid-1990s, Dion has frequently employed the form of the architectural folly to house displays of a wide range of objects and to construct intricate tableaux that hint at imagined characters or circumstances, whether humorous or melancholic. Positioning various objects within a folly has allowed him to create works with a complexity of visual material that would otherwise not be possible in public or outdoor spaces.

In some cases, his pieces are not buildings, but "features installed directly in the landscape." 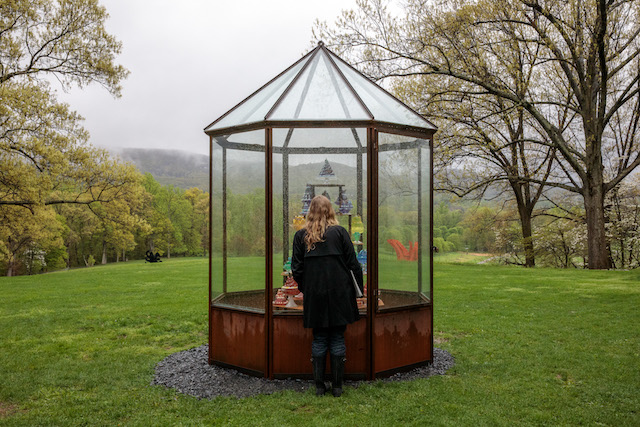 The other new work you'll see this year comes through the seventh iteration of Storm King's "Outlooks" series, this time around featuring artist Jean Shin, who "has chosen to respond to a conservation project on Storm King’s grounds: twenty-four declining maple trees being replaced with black gum, or tupelo, trees that will better stand up to changes in local climate and ground conditions." Shin has salvaged wood from the trees that were felled as part of this revitalization, and created a monumental and communal picnic table, called "Allée Gathering." It's meant to preserve the memory of "the lost vista."

Click through for a preview of this year's offerings.

Storm King is located at 1 Museum Rd in New Windsor, NY. The trip from NYC won't take you too long (via car, bus, or train), typically under 90 minutes one-way.

#art
#storm king
#upstate new york
#original
Do you know the scoop? Comment below or Send us a Tip