Photos: 100 LES Security Gates Have Been Taken Over By Street Art A free-form street art gallery has been spreading across the Lower East Side, and it's only open during the off-hours. That's because the canvases are metal roll-down security gates on neighborhood businesses and the medium, by and large, is spray paint.

For over a year, the 100 Gates Project has been organizing the painting of security gates across a large section of the Lower East Side. Ranging from detailed portraits to linear patterns and surreal bursts, each painted work has been the product of careful matchmaking done by the Lower East Side Partnership's Natalie Raben. Painters, designers, and graffiti taggers were paired with restaurants and shops that best fit their aesthetic and given free reign over how, and what, to paint on the gates.

Raben and the LES Partnership worked with street artist Billy Rohan to found the 100 Gates Project, and were able to secure $30,000 in funding from the Department of Small Business Services and the Economic Development Corporation after emphasizing economic and quality of life benefits (additional sponsorship has come from Tiger Beer, and many of the gates sport small stencils of the brand's logo). Several of the 100 pieces have been finished for a year or longer, and almost none have been vandalized. 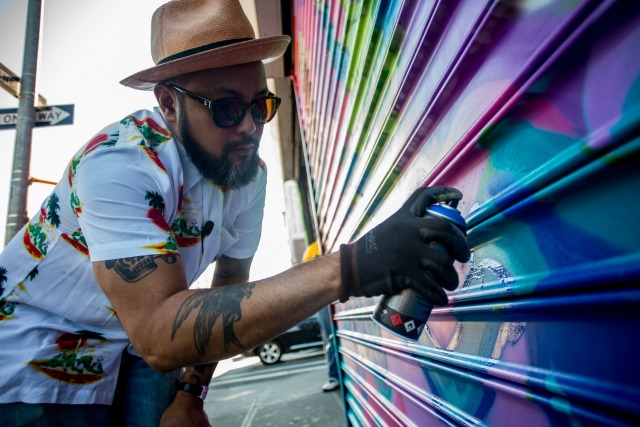 Early Monday morning outside of the iconic storefront of Katz's Deli, street artist L'Amour Supreme shook up three cans and carefully sprayed detailed strokes onto his gate painting—a multi-panel mural of a cartoon cat lusting after a deli-style salami and pickle. L'Amour will finish the mural on Wednesday night, marking the completion of the entire project, during a private reception at Katz's. 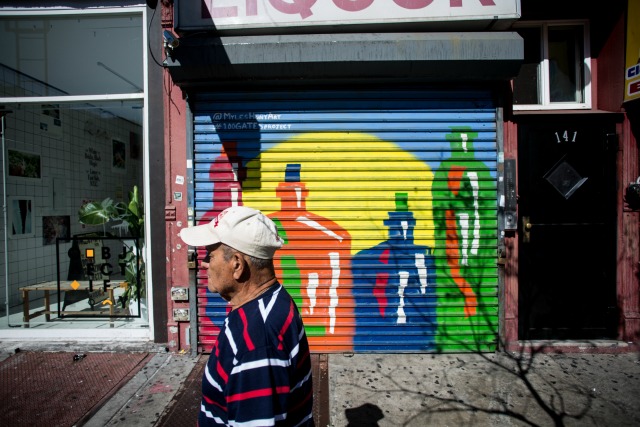 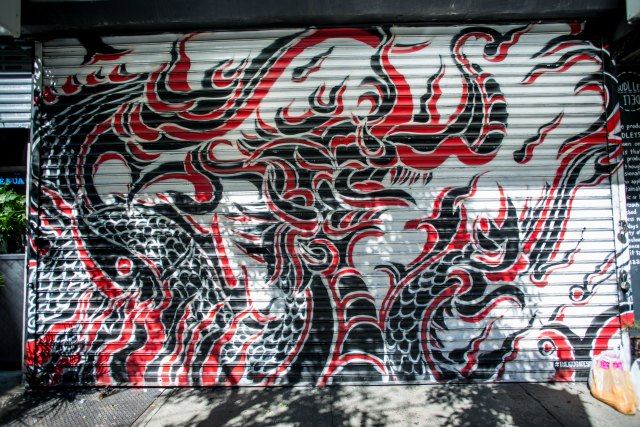 "It's not everyday where you get to support a project that you find really celebrating public art and at the same time uplifting small businesses," EDC president Maria Torres-Springer said of the project Monday.

"It's a great project on so many different levels," L'Amour said. "They're providing artists with canvas and an opportunity to showcase their work. It's also helping small businesses and the whole Lower East Side."

The 100 painted grates can be seen throughout a section of the Lower East Side bordered by Houston, Canal, Allen, and Essex Streets.

#graffiti
#l'amour supreme
#Lower East Side
#security gates
#street art
#original
Do you know the scoop? Comment below or Send us a Tip