They're often presented as two divergent ways of life: a stable home versus the wild open road. For twenty years, Tod Seelie has used photography as a way of enjoying both extremes. His keen artistic eye and adventurous spirit have enabled him to conjure images that seem to come from another world, and since Seelie moved to New York City in the late 1990s he's train-hopped across the country, sailed through far-flung waterways on handmade art boats, and wandered down dense alleyways in faraway countries. He's also made himself a comfortable nest on the edge of Bushwick. But nothing is forever.

It's perhaps a sign of changing times: Tod Seelie is leaving New York. His building is marked for demolition this fall, and with the city's photography industry growing ever-more fickle with each passing Instagram update, Seelie is breaking camp and moving to Los Angeles. But not before putting on one last photography show as a NYC local. His newest work, a 70 image show entitled Feral Future, will open this weekend at the Superchief Gallery in SoHo.

Seelie's kinetic, hyperreal approach to photography fires on all cylinders in Feral Future. He shows us flailing limbs, flaming cars, attack dogs, and many beautiful ruins. "It’s a very particular side of America," Seelie said, noting that the DIY cultures of Detroit and post-Katrina New Orleans play major roles. So do still and empty landscape shots, a staple of his work he highlighted in 2015's Outland Empire show. There is something for everyone in Seelie's work because he's willing to try just about anything.

But one image clearly stands out. It shows a street lined with houses that continues out toward an arid, empty horizon. The buildings simply end; the photo stalls human progress and puts the future of civilization into question. Should Feral Future become a book, the street photo will surely be its cover. It's simple and terrifying. It captures the artist's own uncertain fate.

Did you use this new show to emphasize images of yours that you had felt were neglected? Photos that were great, but orphaned amongst your other projects? I looked at it as a way to revisit my work and put it together in a new coherent way. A lot of times when I talk to someone about my work, they say "You should do a book on the raft trips." Or "You should do a book on Bike Kill." Those ideas would have a wonderful little bow that you can put on them, but that's not interesting to me. I want to approach it on a bigger scale. I want to approach it as a bigger story. I don't want it to be a short story, I want it to be a novel. That's what interests me, and that's what Feral Future is. Bright Nights was a kind of novel about New York, and so Feral Future is what I was finding outside of New York City.

How much material did you go back through? I've got no clue image-count-wise, but it's from the last 10 years. It took me seven solid days. That's not really the hard part. The problem isn't finding images, the problem is the emotional aspect. Putting together that book on New York was one of the hardest things I've ever done, because you really have to sit there and relive every relationship, every breakup, every friend that turned against you, every person that died, it's just...It's hard.

What I hope for with this series is that it's compelling and leads you to ask questions and wonder about places and people. That's what I think the whole point of art and photography is, to inspire thought, inspire questions, and inspire reactions.

How personal is the title, Feral Future, then? Are you looking to your own future as something...wilder? Is there a dystopian fortune in these photos? It's a little bit of an ominous nod to what could be coming, which is exacerbated by the whole Trump phenomenon on a national scale. A lot of people that I talk to have a heightened sense of insecurity right now because not only is the possibility of this person being elected real, but the fact that he got this far is shocking. And admittedly a lot of these photos show very bleak settings. There's a lot of abandoned and desolate landscapes, which are out there and always have been.

The people who inhabit these no-man's-land places, would their relative insecurity get worse under a Trump presidency? It's hard for me to say, but my instinct is not really. Because most of the people I know are extremely resourceful, master DIY types. A lot of them have had a long history of being self-sufficient, so I think these are the people who are the least threatened. They're not dependent upon the security of a house in the suburbs—these are people who have known financial and residential insecurity. They learn to swim differently very easily. 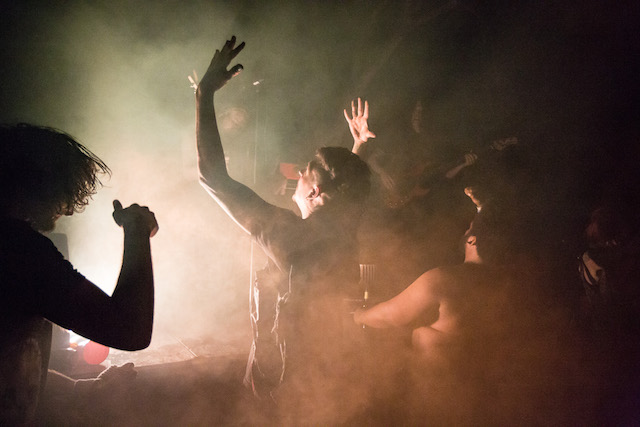 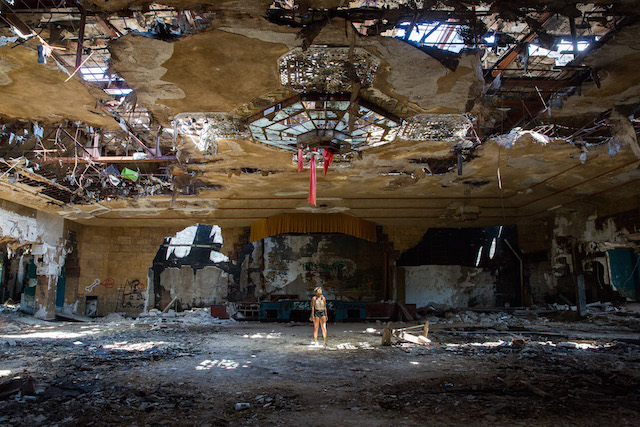 How did you approach the digital screen format? The book has always been my favorite format for photography, so I approached this show as a book with each screen as a chapter. I picked five images per screen because it's enough to feel like you can get into something and you can see a series of relationships, but it's not too many. The work in this show is an extension of the show I did last year Outland Empire. I intentionally kept the images from Outland Empire out of this series, because I'd already shown them. But when you're looking at these you can see that Outland Empire is just another, related chapter.

Where are you finding new photography and new art that interests you? I don't find much. It kind of bums me out. If you look in my room, I have shelves full of amazing photo books but they all kind of stop at a certain time period.

But do you think people are just treating, or mistreating photography, in a different way now?
I feel like the problem is that there's this "follow the leader" aspect for people—primarily people younger than I am--that have access to the internet and Instagram specifically. And filters have exasperated that. Instead of getting a raw image and working it from scratch, you can just filter it, and it looks good. And that's the thing, it doesn't look bad, it works!

People end up making very pleasing images that look completely identical to tons of other images. And they consider that a success, because their image looks like this other person's image that they really like. When I was starting in photography, the idea was you looked at the people that really blew your mind, and you studied them, and you took influences from them, and then put them into your own language.

It seems like no one appreciates the sublime anymore. A lot of newer images I see are very pretty but it's very empty. It's like cotton candy. It's just air, there's nothing there. And I have a really hard time finding new work that actually interests me. It's not information overload, it's just not pushing harder with what you're seeing.

It's too bad that legends like Bruce Davidson are getting passed over by a lot of young photographers. Have you seen his subway book? Holy shit! That's what I'm talking about.

It's unreal, and that's all about pulling the sublime out of the most mundane thing out there. The fact that that book exists to me just proves the point that you can do it. It is out there. It is possible. It's not because he shot it on film, and it's not because he used a particular camera. It's not. It's him, his vision, his instincts. 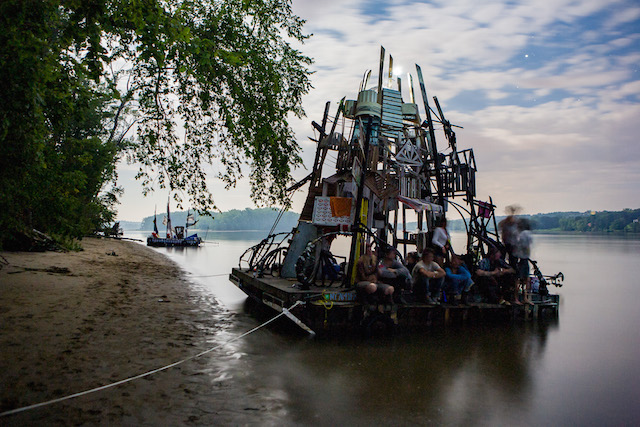 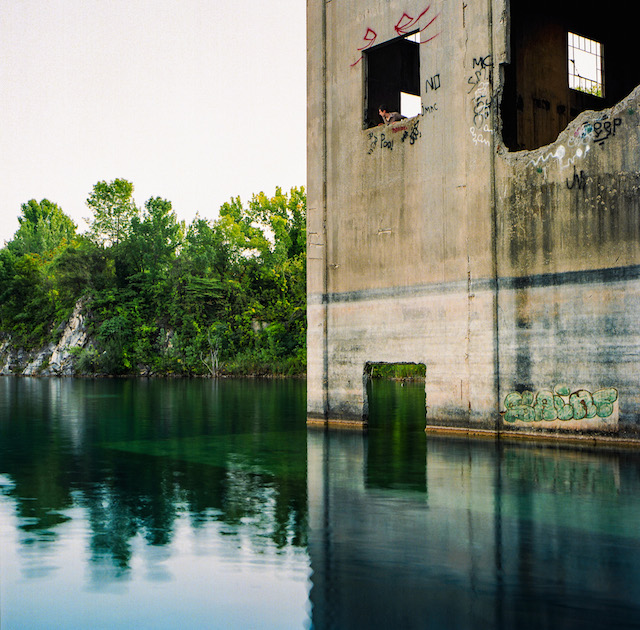 Do you think that we're headed for a "pretty photography" bubble burst? I'm not sure. I sometimes feel that I'm just being some grouchy dude who loves abstract expressionists and he's really pissed about these minimalists fucking it all up. It might just be the evolution of art, but at the same time I can't pretend I like it.

Do you think something has changed about the way editors and publications and the media in New York see professional photography as less valuable? That's really hard for me to say because I've never been an editor. Things have changed a lot, and it used to be that when a magazine got in touch with you, you'd say "Cool, what's the page rate?" They'd tell you. That was it. Now, because photography's become much easier and more prevalent, the value has plummeted. Also coupled with the fact that everyone and their brother is now a photographer...[trails off] The entire thing is being devalued. I don't know what the ultimate outcome is going to be.

So this show at Superchief is a bit of a farewell show, you're leaving New York? Had you thought about leaving before? Not really. The thing I loved about New York was that it was always an inspiring place. I could always find some sort of work and find people to collaborate with. I could always find things I was excited about and it enabled me to work hard, save up, and travel. Now it looks like I've been outpaced by the cost of living here versus what I'm able to earn. Nineteen years is a good run though. 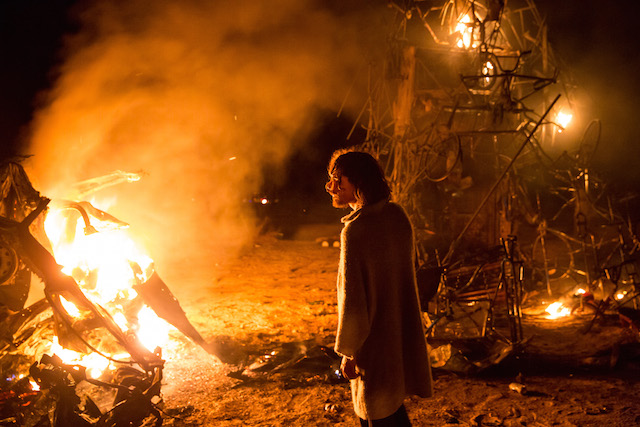 And moving to Los Angeles made more sense than other places? I chose LA because it's where I have the greatest chance of continuing to try and make a living as a photographer. That's pretty much it. It's similar to New York in some ways. There are huge communal households that are building crazy bikes and tree forts in their yards. It has its own creative spirit.

Are there aspects of your work and your process that you anticipate having to change and adjust for LA, versus New York? I have no idea. I'm hoping that living somewhere new will help refresh my interest in shooting where I live, going out on the street with fresh eyes. LA is totally different and massive. Maybe I have high standards, but I want to be in an inspiring place. So, we'll see.

#photography
#Superchief Gallery
#tod seelie
#original
Do you know the scoop? Comment below or Send us a Tip