When we first encountered New York City photographer Thomas Holton in 2008, he was five years into what originally started out as a masters project at the School of Visual Arts: documenting the Lams, a Chinese-American family living in a 350-square-foot apartment in a five-story walk up building in Chinatown. Since then, his photos, which now span a 15-year period and cover the changing relationships in a family, have been written about in various publications, including the New York Times and Aperture magazine, featured in several exhibitions across the city, and published as a book.

Holton's work is currently on view at the Museum of the City of New York. The exhibition, "Interior Lives: Contemporary Photographs of Chinese New Yorkers," features the work of three photographers who examine the lives of Chinese Americans. We recently interviewed Holton via email about the project, how all it began and why his working and personal relationship with the Lams has endured for so long. The exhibit runs through March 24th.

How did you come across the Lams? Did you anticipate that the project and your relationship with them would last 15 years?

After working for around 10 years as a photographer's assistant, I realized I was not making my own work and wanted to explore my own creativity and potential further. So I was lucky enough to get in and enroll at SVA and earned my MFA three years later. I was 32 when I went back to graduate school and had no idea what to expect or that my "thesis project" would become so engrained into my personal life.

I worked with a local Chinatown housing advocate who was kind enough to take me along her neighborhood walks to visit and check in with her clients. This was initially my way of getting behind closed doors and seeing what "life" was really like in the area. The Lams were one of maybe seven families I met but were very friendly and welcoming, so I decided to maintain contact with them and visit regularly. 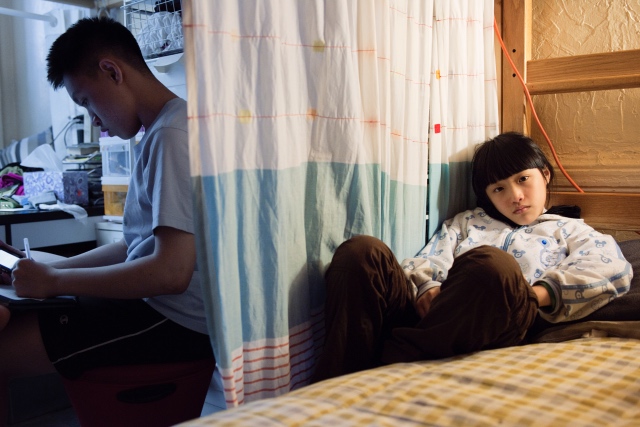 What were the challenges of shooting subjects in such a confined space? How did you gain their trust and weave yourself into their routines?

The only challenge with shooting in such a small space is making sure I had a wide enough lens to at least get some space within my frame. I always and only photograph with a 35MM lens and still often find myself scrunched up into the corners and walls to get the image I want. It is fun to contort myself and continually find new ways to photograph a very familiar space. Over a period of time, my presence became "normal" and I found myself running errands and doing chores for the Lams too. I often picked up the kids from school. The project and visiting the Lams morphed into something I simply did every week and I never found it to be a job or not worthwhile.

Did certain aspects of their lives and personalities resonate with you in a deeper way?

My overall interest in Chinatown is because of my Chinese heritage. Even though I am half-Chinese and half-American and had Chinese relatives living in the area, I never felt a true connection or bond with the neighborhood...I always felt like a visitor. I certainly was familiar with the food and customs but the Lams' everyday life was foreign. I certainly did not grow up in a tenement on the Lower East Side or immigrate from Hong Kong. As I got to know them better and better, our relationship grew beyond photography as we became more like family. 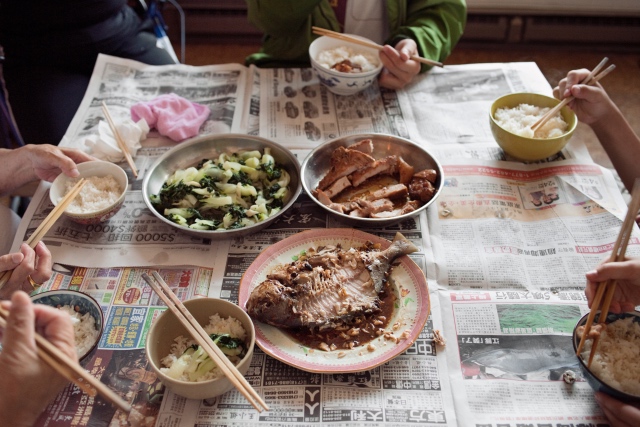 As you yourself have noted, the photos feel heavier in tone as the children grow older and as the Lams struggle to make ends meet. How much did the pressures of gentrification and the growing economic divide of New York City inform your work?

I never considered the changing neighborhood to be a part of why the Lams family struggled to stay whole in any way. Let me make it very clear that both parents work and they never "struggled to make ends meet." Steven did lose his job in 2008 during the real estate bubble "Great Recession," but so did many people. The parents always provided for the children, so please let's not portray them this way. The parents broke up, which sadly happens on a very regular basis in all walks of life and cultures...rich/poor, white/black or gay/straight.

Both parents work and are just as challenged as most New Yorkers are in trying to raise three kids and provide. Ultimately this Lams project is about how life is messy and not so easily scripted...just like ours!

While the neighborhood is definitely changing, they still live in their Ludlow Street apartment.

No. They have always been open to me showing the work to the world. They trust me to not make or showcase work that is overly angry or negative in any way.

The Lams' daughter was the flower girl at your wedding. Were you ever afraid of becoming too close with your subjects? Was it painful to see the family splinter due to divorce and the kids leaving for college?

On the contrary, I want to get as personal and close as I can to my "subject matter." I want to feel an emotional connection to what I am photographing. Otherwise, I will lose interest. It was rough to see the parents break up, but there was nothing but pride and happiness for the children getting into college and grow into young adults. 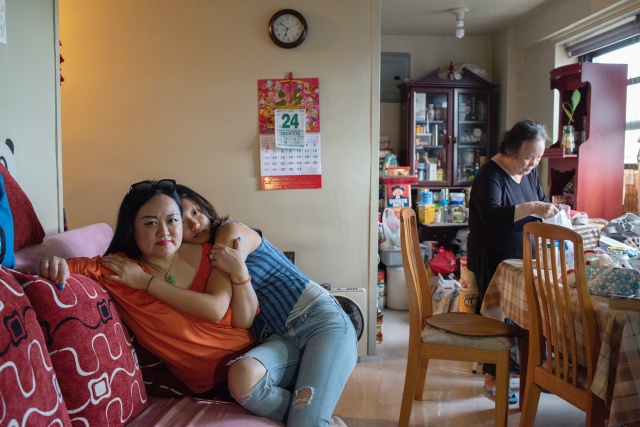 "A Month Before College"

What is the family doing today? What do you think it is that keeps drawing you back to the Lams?

Two of the three kids are in college while one is still in New York City, working. Steven [the dad] lives in the Bronx, and Shirley and the kids still maintain Ludlow Street as their home. What keeps me making work is that while life can be messy, it continues on so why wouldn't I want to be involved? I can't wait to see how the kids grow up and what kind of adults they'll be. As a father myself, what's more special than that?

Listen to an audio segment on this story that aired on WNYC:

#Chinatown
#photography
#thomas holton
#original
Do you know the scoop? Comment below or Send us a Tip