Back in the day it took more than an Instagram feed to be able to call yourself a "street photographer." There was some real dedication, time spent both on the streets and in the darkroom, and after all that, no simple way to show everyone what you had captured. 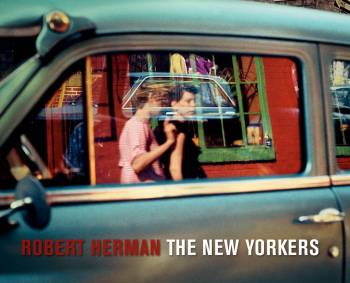 Robert Herman began documenting the city and its people in the 1970s, and his vivid images look unlike others we've seen from previous decades—dilapidated sun-soaked subway cars, disaffected youth attached to pinball machines, and a young woman who looks less like a New Yorker and more like an extra from Dazed & Confused. Many of his subjects look like they're straight out of Central Casting, in fact, and his photographs often look like movie stills—this may have to do with Herman's own past.

Born in Brooklyn, his father owned a movie theater on Kings Highway—"when I was 13 I started working there as an usher and a candy stand guy," he told us. "This was my way of being close to my father. I loved movies, and going there gave me the chance to see them over and over. When I look back I can see that my street photography has a cinematic quality." In 1976, he enrolled at NYU Film School and got his own apartment on Waverly Place for $250 a month.

It was around this time that Herman began shooting the photos that would eventually land in his book, titled The New Yorkers, which spans the years 1978 through 2005.

Herman recently shared a few photos with us from that book, and discussed his life in the city he has documented so well. Click through for a look at his images from the 1980s, which he confirms was one of the most "wonderful" times to shoot here.

Where else have you lived in the city, what neighborhoods? After living near Washington Square, I moved to 13th and 3rd Avenue near the Variety Photoplays and the Paladium. A couple of years later, I got a loft in Little Italy on Kenmare Street, in the building that now has the Storefront for Art and Architecture on the ground floor. I had a place to shoot and I set up my first darkroom. This where I lived when I began to make the photos that eventually became my first book, which I self published, The New Yorkers.

In 1984, the building was sold and because rents had risen so much I ended up in Astoria. As always I continued shooting in the neighborhood near where I lived. Then 8 years later I moved to Boerum Hill, Brooklyn. It hadn’t gentrified yet and in fact it was a pretty rough neighborhood. It was a 2 bedroom and again, I set up a darkroom and a shooting space. Today, I live in Battery Park City.

What was your favorite year, or decade, to shoot the city during? SoHo, Tribeca and the East and West Village in the early '80s were wonderful places to shoot. The buildings were short so there was direct sunlight on the street. My inspiration for making a street photograph always starts with the light and the color. I shot Kodachrome because I loved the way the colors popped. SoHo was still the place where the artists lived, graffiti was everywhere I looked and it made a great background for some of my photos. Kenmare Street was on the edge of Little Italy and still an Italian neighborhood, so I was constantly making pictures.

What are the biggest things you've seen change over the years? The loss the mom and pop stores is an ongoing tragedy. So many things that I loved about Manhattan are rapidly disappearing are being replaced by corporate chains. When a Starbucks is in the background, I could be shooting in any major city in the world. And of course, now that everyone is looking at their smart phones, it makes it much harder to make compelling pictures on the streets.

Can you describe a typical day you had back in the '70s or '80s? In the early '80s when I lived on Kenmare on the edge of Little Italy, I would go out with my Nikon loaded with Kodachrome. The raw material for good photos was everywhere I looked. I was teaching myself street photography, learning to expose with a manual film camera, and referencing all the greats who came before me. The books by Kertesz, Callahan, Frank and Winogrand that I bought from Photographer’s Place on Mercer Street were the beginning of my education.