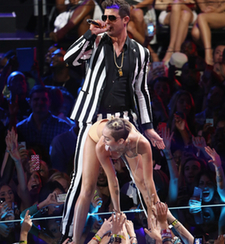 On Sunday night Miley Cyrus "shocked and awed" America when she twerked her 20-year-old ass off during a performance on the VMAs. It was hardly outside of what one would expect her to do on even a normal day, never mind on a day she's performing at a huge MTV awards show airing just prior to her big album release. And her controversial moves probably twerked, shifting all of Bored America's eyes her way, while driving the final nail into the coffin of Hannah Montana.

But as truly unshocking as it was, people Can't Stop talking about it. And their criticism has moved at least four young, misguided youths to get offline, go outside in the fresh air, and talk about what we're all talking about online still. Our tipster tells us these kids were spotted holding their signs (which read: "We must worship Miley Cyrus! Twerking is good!") in Union Square this afternoon.