The Met's version of the CBGB bathroom. (via styledotcomkatharine's Instagram)

Following the ceremonial parade of sideboob last night, The Met's new PUNK: Chaos to Couture exhibit is now officially open, and the centerpiece for any die hard New York punk reenactor has got to be the CBGB bathroom, which was recreated for the show. While The Met has so far refused to comment on the work of art, CBGB's current owner Tim Hayes tells us, "They got the earliest version of the bathroom just right." The Met's version even comes complete with cigarette butts, harkening back to a New York City with looser laws. Hayes also added, "I love that they gave a shout-out to the Dead Boys."

The venue's real bathroom fixtures are actually still out there in the world, emanating their magic, and were recently used as part of the set for the upcoming movie about the legendary club. And here's the real bathroom, taken at a Gothamist Movable Hype show a couple of months before the venue closed: 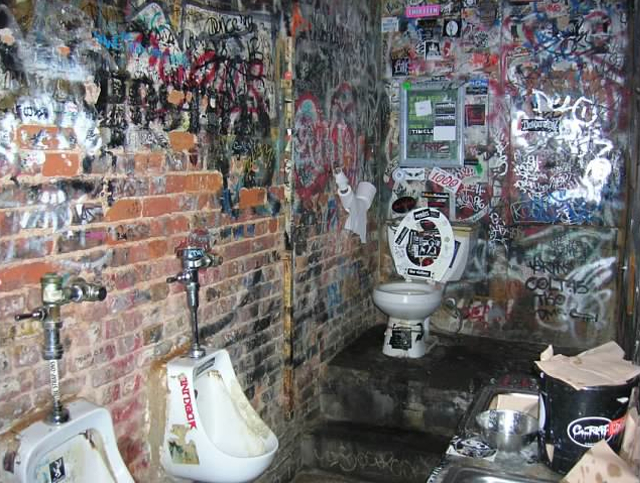 #bathroom
#cbgb
#metropolitan museum of art
#PUNK: Chaos to Couture
#the met
Do you know the scoop? Comment below or Send us a Tip