In the 1920s, the NY Times was ON IT, and "it" was how the public loves their animal stories. Today Ephemeral NY posted a photo of cat holding kittens in its mouth, stopping traffic in the middle of Manhattan. There wasn't much else about the photo offered, but a commenter pointed to this NY Times article from November 4th, 1928, titled: “Animal Stories Are Also News." We dug up the original article in their PDF archives (you can read it here), and look what image appears: 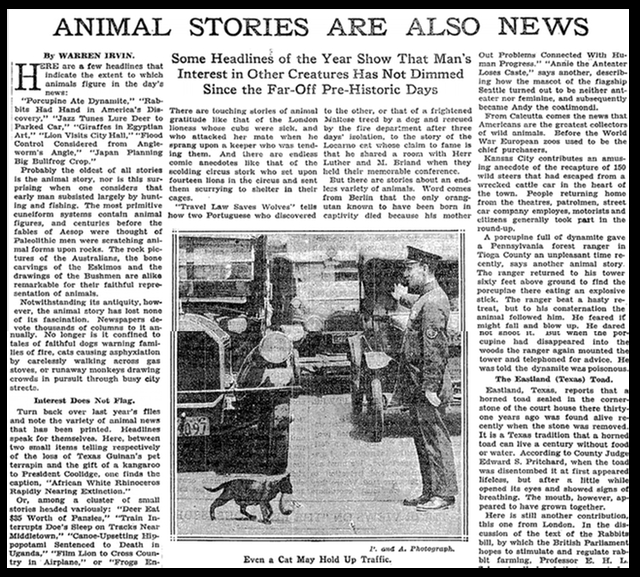 The paper declares: "Probably the oldest of all stories is the animal story... not withstanding its antiquity, however, the animal story has lost none of its fascination. Newspapers devote thousands of columns to it annually." The headlines they pull for their article would have gotten mad pageviews even nearly a century later: "Porcupine Ate Dynamite," "Lion Visits City Hall," "Train Interrupts Doe's Sleep," and finally, "Even A Cat May Hold Up Traffic."

And as the old-timey article presciently notes, "Cat stories alone would fill volumes. Look at the headlines! 'Cats of Rome Lose Their Forum," 'Cat Passes Hours Vainly Snatching At Mail Chute,' 'Prison Cat Sacrifices Life For Baby Rabbit,' or 'Jail Delivery Scare in Bronx Caused By Cats On Fire Escape.'" As for this particular photo, this cat "held up traffic in Lafayette Street while, with her kitten in her mouth, she strolled nonchalantly from one side to the other."

Of course, while these stories were simple they were built out in article form, with facts and likely with a compelling photo—in these days as we near Idiocracy, our animal stories are mostly in listicle form, with 58 random photos accompanied by text written by a fourth grader. But hey, we love animal stories, and the Times was on it way back in the 1920s.

#animal stories
#cat
#flashback
#history
#kittens
#NYT is ON IT
Do you know the scoop? Comment below or Send us a Tip
A new Gothamist is coming! We’ve moved comments over to our beta site. Click here to join the conversation and get a preview of our new website.