As the NY Times noted in their piece last year regarding the return of pubic hair, "For centuries of artistic tradition, the absence of pubic hair was merely an illusion. Renaissance artists depicted the female pelvis in smoothed stone or oil-painted shadow." And now, Brave Artist Dov Charney is taking that taboo on with his latest window display... or maybe he just needed a new way to sexualize young women. UNISEX PUBES MADE IN AMERICA $49.99! 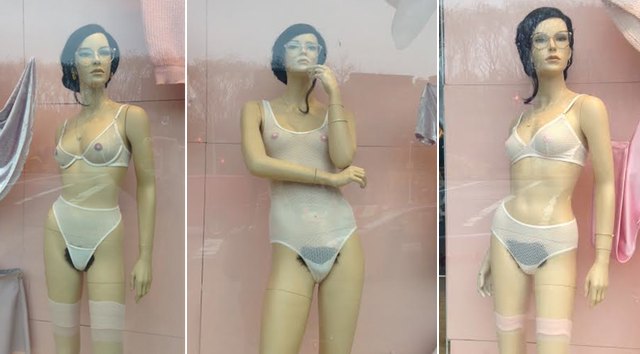 UPDATE: Jen Chung is on the scene, and says the mood is light, "people are laughing." Unlike the very serious—dare we say Feminist—mannequins chosen for this display. 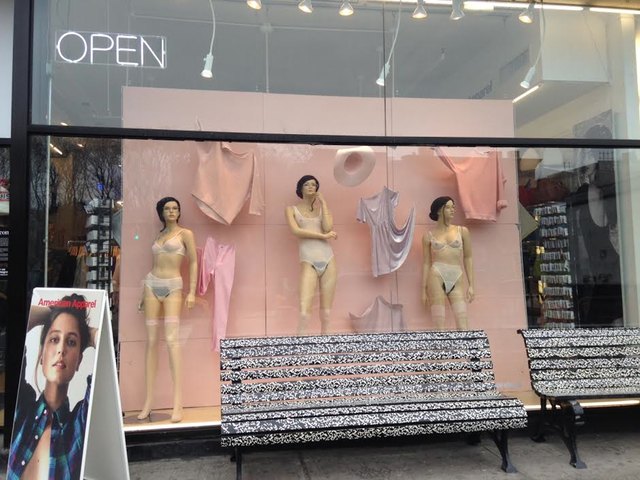 And American Apparel's Ryan Holiday tells us, "The display was created for that store specifically." He also passed along this statement: "American Apparel is a company that celebrates natural beauty, and the Lower East Side Valentine's Day window continues that celebration. We created it to invite passerby's to explore the idea of what is "sexy" and consider their comfort with the natural female form. This is the same idea behind our advertisements which avoid many of the photoshopped and airbrushed standards of the fashion industry. So far we have received positive feedback from those that have commented and we're looking forward to hearing more points of view."

#american apparel
#grooming
#mannequin
#window display
#original
Do you know the scoop? Comment below or Send us a Tip