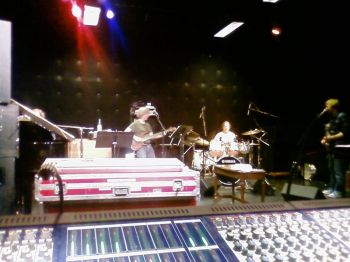 In September, the band Phish (assumed to have still been disbanded at the time) reunited at friend/former road manager Brad Sand's wedding, giving hope to the hemp set that the foursome would soon have a proper reunion. Miracles do happen, and it was announced soon after that the band would play three concerts in Hampton, Virginia next March. Well, for those of you who haven't hit up Jambands.com in a couple days, you may have missed out on this little nugget: That photo is allegedly of the band rehearsing in a Brooklyn studio.

The website notes that "Though the photograph's author is unknown, the shot is believed to be real." Is this to become the borough's very own Sasquatch photo, or is it the real deal? The site confirms the band has been seen out and about in New York; "Mike Gordon and Page McConnell attended photographer Jay Blakesberg’s New York book signing Monday. Gordon was also spotted at the final night of Phil Lesh’s Nokia residency Tuesday."

A little investigating led us to Trout Recording in Park Slope, where some of the band members have recorded in the past. A call to the studios this morning was fielded by Bryce Goggin, who told us, "There is not a band called Phish in my studio at this time." Our secret decoder ring unscrambled this lexical puzzle and told us that it's all but confirmed: Phish is in Park Slope either rehearsing or recording or both! Secret show at Union Hall all but confirmed!

UPDATE: Commenter "jrocket" says this photo is from SIR Studios on West 25th Street in Manhattan, as all-but-proven by this photo from their website of a space that looks very similar to the above. Allegedly they were there as recently as "the beginning of this week," but may be moving around.

#brooklyn
#park slope
#phish
#practice
#studio
#Trout Recording
Do you know the scoop? Comment below or Send us a Tip
A new Gothamist is coming! We’ve moved comments over to our beta site. Click here to join the conversation and get a preview of our new website.